Guest blogger, Autumn Thon is a sophomore at UNH majoring in Social Work and Women’s and Gender Studies. They are a non-traditional student attending college at 27. Autumn is working with both the UNH Office of Community Equity and Diversity and the Sustainability Institute to bring the 7th Food Solutions New England's 21-Day Racial Equity Habit-Building Challenge to UNH as part of an internship placement through the SITC @ UNH program.

As part of their internship work, Autumn has interviewed and will feature some of the sustainable vendors who work with UNH Dining. This is the first of several in their vendor blog series, "UNH Eats Equitable".

I don’t believe that it’s an exaggeration to say there are few things more integral to the functioning of UNH than tea and coffee to keep its people running. We'll get to the coffee later, but first, to kick off this series and the UNH 21-Day Racial Equity Habit-Building Challenge, we'll be starting with the tea. Meet the company that brings you your hot chai between classes: Teatulia!

Teatulia is an interesting study in that, as a company that sells locally but grows internationally, it has a sort of double lens on social justice affairs. There’s a lot to be learned from having a local, international, and global view.

I sat down to (of course, in COVID times) a phone call with Nick Stefiuk, the Vice President of Sales, E-Commerce & Foodservice for Teatulia for a deep dive into what the company holds at heart. In just under an hour, we discussed equity, sustainability, and the power of regenerative agriculture.

It was about a year and a half ago at the time of this writing that Teatulia began selling in our dining halls. Nick has been personally acquainted for some time with our wonderful Director of Dining, David Hill, who helped me to connect with the vendors who will be featured during the current Challenge. In Nick’s 15 years selling to universities, he’s always been on the lookout to partner with unis with like-minded values. UNH’s leading status in sustainability drew Nick, the organic and compostable nature of Teatulia’s product drew UNH Dining, and a happy match was made. 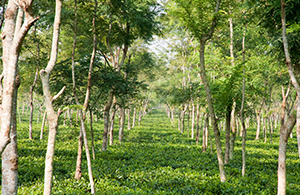 One of the first things made clear to me is that Teatulia is a business dealing with roots, whether that be in the tea garden they source their leaves from or when tackling issues of equity. Their view on combatting inequities in food systems is to uproot them at the base of the supply chain. The Tea Garden is housed in one of the most economically poor regions of the world, in Northern Bangladesh. Teatulia has invested significantly into initiatives to empower the community working in and living around the Garden economically. The idea is that by creating good-paying jobs in an area lacking such and providing resources with which people can start their own local businesses, a serious impact can be made in terms of equity on a global scale, in the world economy.

And then, of course, there is the looming threat of climate change. “The biggest thing when it comes to environmental justice is that it affects everyone,” says Nick, “But unfortunately it’s often the most vulnerable communities that are most impacted. They don’t have the resources to protect themselves against environmental threats. And it’s often the people who contributed the least to climate change that are left to deal with its impacts.” It’s important to keep in mind this intersection between social and environmental justice, especially as we head into the future and see more and more communities endangered.

Some of the environmental initiatives Teatulia takes are to ensure that the vast majority of its materials are compostable and to carefully monitor their water usage, but in my conversation with Nick, it was clear that the Tea Garden is the most prized project, perhaps because of its multitude of impacts. Today the Garden is a thriving ecosystem, but the picture of the land it occupies wasn’t always so rosy.

The approximately 4,000 acres were purchased in 1995, at which point it was practically a desert. This owed largely to a practice called rock lifting, in which rocks are pulled from the soil to be sold to cement and concrete factories. Teatulia employed old, deep organic farming methods over about six to eight years to build the land back up into fertile ground on which tea could be grown. These years of hard work have paid off in, yes, an abundance of fresh tea leaves, but also in a multitude of other ways. Even animal species that have been long-vacant from the area are returning, which shows, in Nick’s words, how long it can take for an environment to recover. 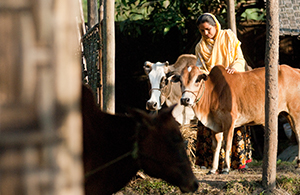 Inequities are not one-dimensional, though, and through its initiatives at and around the Tea Garden, Teatulia has taken a special focus on local women and children who are further marginalized and vulnerable. Their cattle lending program has been one of the flagships. Through this program, area women are given a cow that they can use to sell milk. They are able to keep any calves that the cows produce, and in return, the women can provide natural, organic fertilizer straight from the cow that can be used in the Garden. Some have been able to buy land or start businesses, a big deal where women historically haven’t held a high status in their communities. For many, this has even taken their husbands out of hard labor jobs. Nick shared one of the most powerful moments he’d experienced, meeting with a group of women participating in the lending program outside of the school their children attend.

So what does the future look like for Teatulia?

“(We’d) love to lead the way to a future where sustainability is the norm and not just a food choice,” Nick elaborated close to the end of our interview, “We have to lead by example and educate people at all levels of the food chain. A lot of people are stuck on old ways. Sustainability is better for the earth, the environment, and… everything.”

Leading by example. Isn’t that something we can all keep in mind as we enter into the Challenge and beyond? A parting thought Nick left me with was that he definitely appreciates UNH and its ability to bring equity and sustainability to the forefront of Dining, and that he hopes other universities will follow our lead. When a lot of students make a commitment, it can make a big difference.