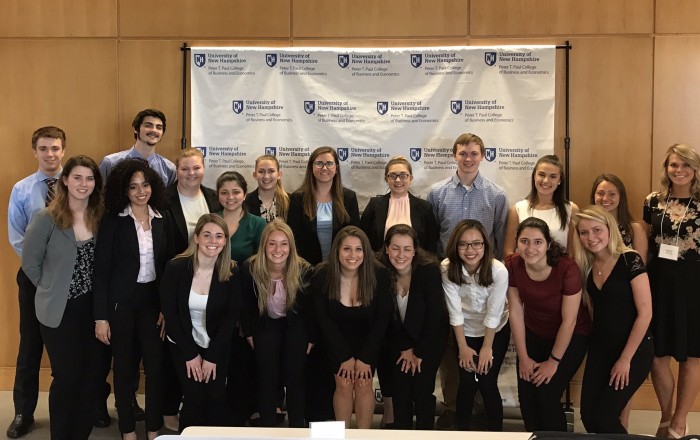 Coming into my freshman year at Paul College, I was initially overwhelmed by the sheer number of students in the business school compared to my small high school graduating class of only 200 students.  In high school, it was never hard for me to stand out from my peers and it was comforting being in an environment where I knew everybody I went to school with.  When I arrived at UNH, I knew my experience here would be very different.  Initially, I was concerned about my ability as an individual to make an impact on such a large community.  Luckily, each first-year student in Paul College takes part in what is called the First-year Innovation and Research Experience, commonly known as the FIRE Program, where I was able to make invaluable connections with my fellow students.

Each FIRE group consists of around 20 students who meet weekly with their peer advisor.  Having a peer advisor throughout my first year was great because she had so much firsthand experience with what we all were going through, whether it was picking classes or getting involved in clubs on campus.  The FIRE program encouraged all of us to get involved in numerous ways, taught us the ins and outs of being a successful professional, and gave us so many opportunities we wouldn’t have otherwise had.  For example, my FIRE group was fortunate enough to win tickets to a Red Sox game where we got a VIP tour of the park and got to talk to UNH alumni who work at Fenway.  This was an awesome experience which helped us to bond as a class, and is one of the highlights of my first year at UNH.

Arguably the biggest highlight of my freshman year was working alongside my FIRE team on our Grand Challenge Project.  At the end of the year, every FIRE team competed against one another in the Undergraduate Research Conference.  Each team had to create a unique product that addressed one of the five following real-world issues: ‘Water is Life’, ‘Food?’, ‘Threats from Cyberspace’, ‘Medical Breakthroughs’, and ‘Addictive Society’.  My team addressed the growing issue of having an addictive society, and developed a product to help reduce the amount of people who relapse after going through alcohol rehabilitation.

After weeks of preparation, all our efforts culminated at the Undergraduate Research Conference (URC).  Myself and my fellow four presenters earned us a spot in the final round of the

conference, where we competed against the top team from each of the other Grand Challenge categories.  We were so proud of ourselves for even moving on to the final round, especially after seeing how impressive the presentations of the other teams were. We were so overcome with pride when we were ultimately announced as the overall first place team at the URC!

Even almost a month later, the amazing feeling of having my team’s hard work pay off has not subsided.  If it wasn’t for my group’s determination and incredible teamwork, we would not have been able to accomplish everything we did.  It took countless hours outside of class perfecting the concept of our product and practicing our presentation, and each of us, including our awesome peer advisor Hayley, was always willing to put in the extra time to create an end product we were all proud of.

At the end of the day, being able to say that I was a winning presenter in the URC is an accomplishment that is so humbling and one that provided me with so much growth.  However, I gained much more than just an achievement from my experience at the URC.  The lessons I took away from my experience will be instrumental in my future as a student at UNH, and ultimately as a business professional.  I learned the value of taking every opportunity given to you as well as the true importance of the contributions of each individual in the success of an entire team.  I am so glad to have had the privilege to partake in this program; there truly is no replacement for the hands-on, experiential learning that FIRE has provided my peers and me.  After such an incredible first year, I cannot wait to see what is to come in my next three years as a Paul College student!

Samantha Carlen is a member of the class of 2020 at the Peter T. Paul College of Business and Economics at The University of New Hampshire earning her Bachelor of Science in Business Administration.  Throughout her first year at UNH, she became a brother of the coed business fraternity, Alpha Kappa Psi, and will begin as an associate in the Rines Student Angel Investing Fund this coming fall semester.  Samantha was named to the Dean’s List and received the FIRE Luminary award.  She is from Amherst, New Hampshire.