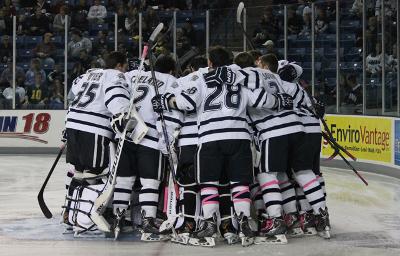 Honoring the graduating seniors of the class of 2014 before the game.

As I’ve said in earlier blogs, there is nothing quite like being at the Whittemore Center when the Wildcats win. And never is this more true than when that win happens on the final game of the season. Well, final home game of the season—the Wildcats have three more games, one against BU in Boston and two against Merrimack College later this month. With a 4-3 victory on Friday over Boston University, the Wildcats gave fans and the graduating seniors (it was senior night, btw) an amazing night.

I arrived with two friends a little after 6pm for this Valentine’s Day game. With our face paint and UNH blues on, we were ready for a win in this final game. Surprisingly, when we entered the Whitt, there were practically no people. The BC game had been sold out and we had figured that this game would be as well. We had showed up at the same time we always did for games. After a little while, the crowd started to grow and while it was not sold out, there was a large enough crowd to give the graduating seniors the farewell they deserved.

As 7pm came around and the puck dropped to start the game, the ‘Cat Pack stood at full attention as the team showed us that they

deserved their looming win. And as the minutes passed in the first period, the chanting that every true fan knows began from both the student section and the mini one that popped up across the ice behind the visiting BU group.

And then the first goal, scored by Dan Correale brought the fans to a frenzy. The final, smelly, dead fish, flopped onto the ice and the celebration continued. All of this was, of course, followed by the BU goalie O’Connor being called a sieve and chanting for more goals—it was Frosty Friday after all, of course we want more goals! When the crowd settled down and the game resumed, the Wildcats continued to skate their hardest and seemingly kept BU surprised as they faked out their opponents. Then, with ten minutes left of the first period, Eric Knodel gave UNH a 2-0 lead. The crowd, again, goes crazy.

Gnarlz celebrates with the ‘Cat Pack in the stands.

Now, with a two point lead and only ten minutes left of the first period, the student section becomes one of the greatest places to be in the UNH community. Everyone is high fiving and yelling, cheering and jumping up and down. It’s entertaining and welcoming. The cheering crowd becomes a family where all of the Wildcats can come together. And know what makes this crowd even better? The scoring of a third goal in the first period by Matt Willows. The first period ended with BU scoring once and UNH having a two point lead (3-1) and a very happy student section.

As the game continued, UNH scored a fourth goal and skated past Boston University with a 4-3 win. Unlike usual games, the student section seemed to linger at the end, watching the team’s victory circle at center ice.  And as the team skated off the ice, the ‘Cat Pack left with high hopes for the last three games for the Wildcats and dreams of next season.