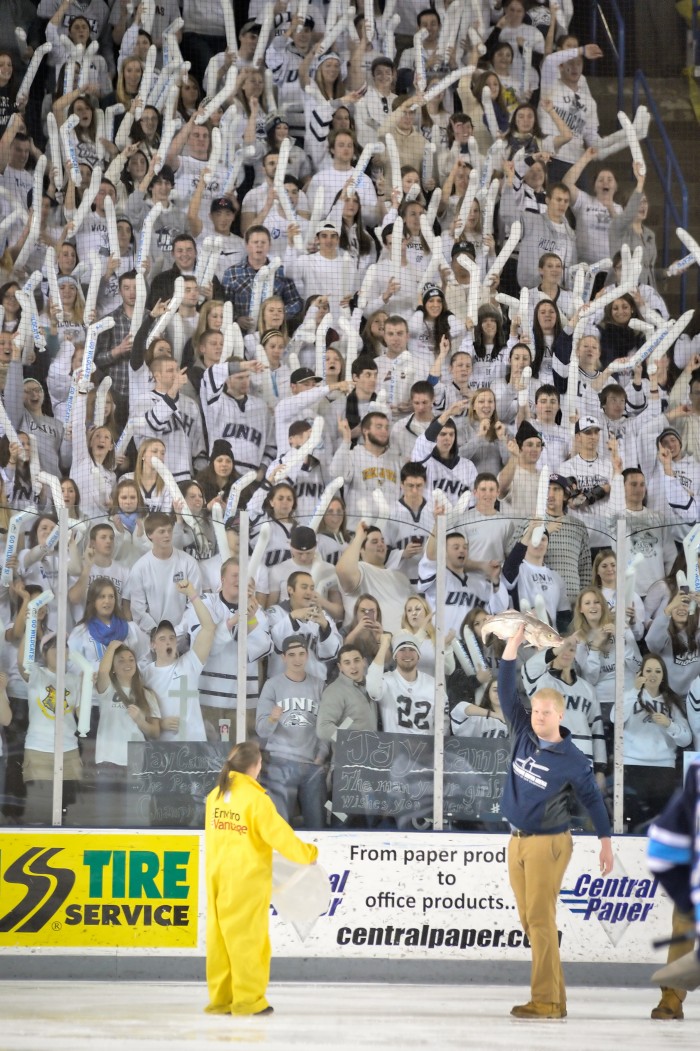 Friday night at the Whitt. The final buzzer of the UNH vs UMaine game goes off and the crowd goes insane. It’s the first game back from winter break; it’s the White Out the Whitt game; it’s the biggest game of the year at the University of New Hampshire. And for hundreds of fans that night, the Wildcats showed that the Whitt is our house. Yet again, not breaking a fifteen year tradition, the UNH Wildcats beat the University of Maine on our home ice, 3-2. Being at that sold out game was incredible and is an experience that every Wildcat should experience at least once during their time here. Let me explain to you just why.

The White Out the Whitt game is always sold out… which is why the most dedicated members of the ‘Cat Pack get in line outside the box office at six in the morning the Tuesday before the game. And I was there for the beginning of the insanity that is this game. Early Tuesday morning when I arrived at the Whitt with one of my roommates, the line to get tickets for Friday’s game had already looped around the lobby. Some students slept, trying to fit in a few more minutes of sleep, while others played card games until the ticket office finally opened. Once the crowd of about two hundred fans had their tickets in hand, the excitement started its build. On the walk towards HoCo, you could hear students discussing their plans for game night—what time they were going to arrive to get in line, where they were hoping to sit, what kind of pizza they wanted after the game. My group of friends were no different in our planning. Some of the group were going to get in line at two that afternoon while the rest of us agreed to show up around five.

By Friday afternoon, the excitement for this game was evident around campus. And nowhere was this more evident than in line to get into the game. The crowd was pushed towards the back of the Whittemore lobby and snaked around barriers in front of the doors into the arena. People chatted excitedly about the game, Instgramed pictures of the growing line, and got decked out in their white and blue face paint and other Wildcat pride gear. By the time the doors opened at six thirty, some people had been in line for four hours or more. The leaders of the ‘Cat Pack (those guys at the lower level seats who lead the cheers and never miss a game, yeah, those guys) lead the charge into the student section when the time came.

Waiting in line is just a part of the fun… just make sure to have playing cards! (of course).

The mandatory hockey game “selfie” showing off that Wildcat pride (I promise I was wearing white under my sweatshirt!)

With still another hour until the puck dropped, students needed to do something to keep the excitement up. And what better way to do that than with the thunder-sticks given out for the game. By the time the student section was half full, the sound of “thunder” was filling the arena. The chants soon followed and before too long, Gnarlz and Wild E. Cat were on the ice getting everyone ready for the game. The starting line ups were announced, the Rev sang a rousing rendition of the national anthem, and then the game began. Not a single student took at seat during each period, as is tradition, but they entire student section seemed to leave their seats as #21 Nick Sorkin made the first goal for UNH after only forty-seven second. The crowd went crazy and the energy of the student section reached a new high. The “I Believe in UNH” chant began shortly after, with the banner coming down and covering part of the student section (including yours truly). This banner caused for an awkward scene of “wait did Maine score?” while many students’ views were blocked. When the banner was pulled away it seemed as though no score had been made but, minutes after, Maine had apparently tied  the game and no one had noticed.

The view from under the “I Believe in UNH”

The rest of the game was a series of exciting goals being made, edge of your seat possibilities of goals, lots and lots of that chanting that our school is known for, and there was even a fight on the ice. Goalie, Casey DeSmith, made some amazing saves which furthered his being called a “goalie god” by UNH students. And the team itself seemed to have gotten out of the slump it was in at the end of last semester. With their win that night, the ‘Cat Pack was going crazy. People were high-fiving each other and screaming, hugging their friends, and the “U-N-H” cheer lead the overjoyed fans out of the arena.

White Out the Whitt was an exciting game to be at and there is just something different about being there. It isn’t the last game of the season though! And if you’re looking for more UNH hockey, there are two games against Notre Dame this weekend! Can’t make it to a game? Follow @UNHStudents on twitter and Instagram where we live tweet the games!