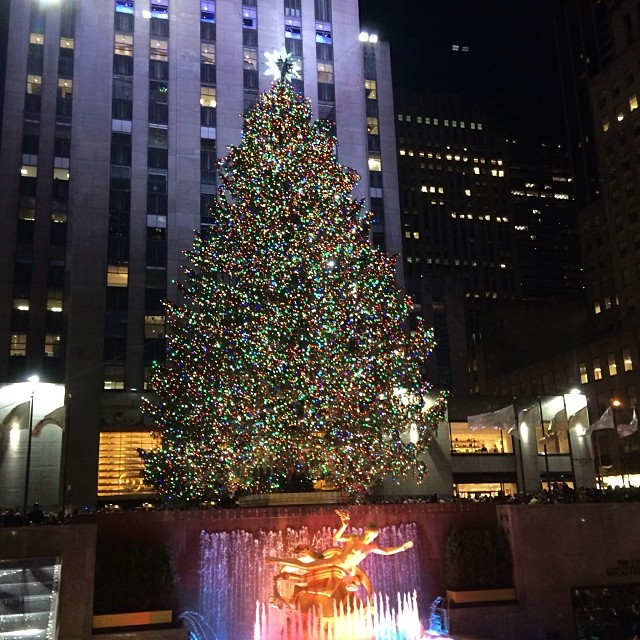 There’s nothing better than being in the city during the holiday season!  Just after the official tree lighting at Rockefeller Center in New York City on December 4th, the residents of Williamson and Christensen took a trip down to the Big Apple!  The trip was organized by the hall councils of Williamson and Christensen, and provided residents of the hall an inexpensive way to spend the day in the city!

We woke up early on the morning of Saturday, December 7th to board the Coach buses reserved for us.  After what seemed like a short bus ride (because most of us were sleeping) we arrived in New York City around 11am.  The buses dropped us off right in Times Square.  It was my first time in NYC so it was quiteoverwhelming!

After getting breakfast a few blocks away from Times Square, a group of us ventured down to Central Park to explore.  Jacki, my hall director, and I ventured around this HUGE craft sale in the park, and wandered through the paths until we found the statue of Balto that I had wanted to see so badly!  We eventually walked all the way through the park to the Metropolitan Museum of Art!

After wandering back through Central Park, Jacki and I walked back through Times Square, saw the largest Macy’s department store in the world, grabbed some food, did some shopping, and headed towards Rockefeller Center to see the tree light up at night!  It was an absolute madhouse.  It seemed like the majority of the city had come to see the tree, but we still managed to get some great pictures and see the ice rink.

Jacki and I then met up with a few of the Williamson and Christensen RAs to go see the Empire State Building, which had been lit up with the colors of the South African flag in memory of Nelson Mandela’s passing.  With only a few hours left in the city, we went back to Times Square to see it lit up at night – there was so much to see and so much people watching!

The bus ride back to UNH was just as quiet as the ride there.  All of the residents that went on the trip had an amazing time.  As the advisor to hall council, it felt good to help plan such a great day in the city, and it was a fantastic way to close out the semester.  Happy Holidays everyone!