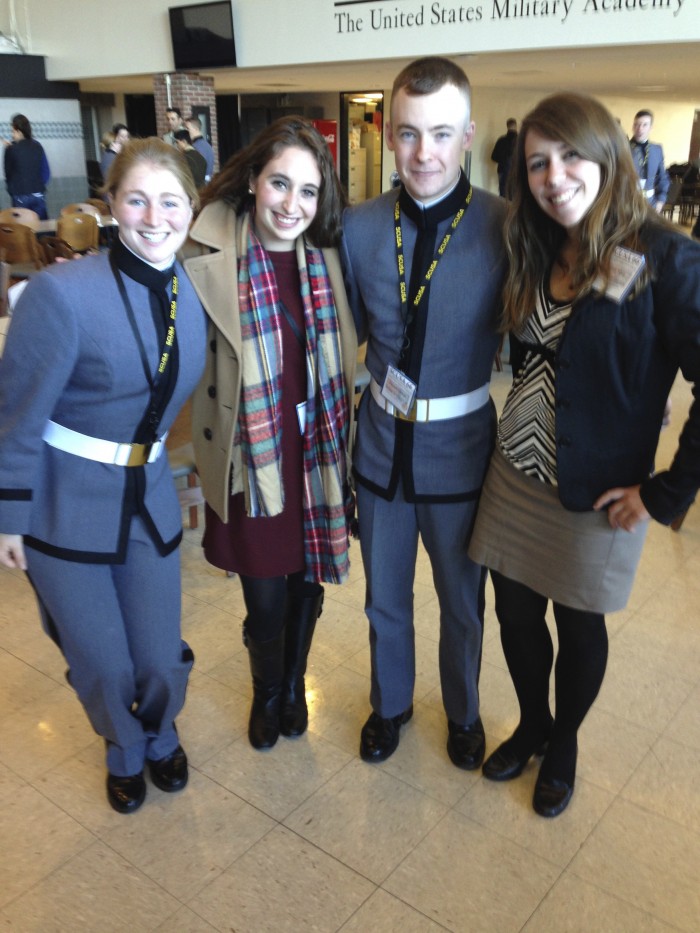 The 66th annual student conference on US Affairs took place at the US Military Academy at West Point from Nov. 12 – Nov. 15. Two senior UNH political science students, Sophie White and Samantha Friedman, attended with the recommendation of political science professor Colonel Ingram. Here we will relay a conversation with the two of them about their experiences at West Point.

Tell us about West Point.
-Sam: West Point was a beautiful campus. Situated on a hill in the Hudson River Valley, it was a major military base during the American Revolution.
-Sophie: I loved the stone architecture and the history of the military base. For example, we saw a piece of the great chain that was stretched across the Hudson River to stop British naval vessels from reaching the base. The valley itself was beautiful, and on one morning we woke up to see the mountains covered with snow!

Taken by Sophie of the Hudson Valley

What was it like being at a military academy?

-Sophie: There are a lot of differences between a public campus like UNH and a military academy. For example, we had to follow TAPS, which was basically a curfew that said we had to be in bed at 11:30 p.m. This was tough, since most of us were normal college students accustomed to staying up until 2 am working on homework.
-Sam: I’d never been to a military academy so it was interesting to have an experience that civilians don’t normally get. Also, their uniforms looked really uncomfortable.

What was the theme of the conference?

-Sam: The conference was centered on the idea of “What’s the Worst That Could Happen?” Each roundtable tackled a worst-case scenario and how the US would respond. Sophie and I were both at the European disunion table titled “Breaking Up is Hard to Do.” It was interesting to have the perspective of both civilians and West Point cadets.
-Sophie: Sam already mentioned the theme of the conference but we were able to have a lot of quality discussions with our roundtable group about the situation in Europe. We also got to listen to a compelling panel of experts on our first night at the conference that included World War Z author and historian Max Brooks, Virginia Burkett, environmental policy expert, Erkko Etula, an economics expert, Brig Gen Kimberly Field, a West Point graduate and deputy director for politico-military affairs in the Middle East, and Kevin O’Prey, an expert on homeland security. Our keynote speaker was retired Ambassador Thomas Pickering.

What did you learn in your roundtable group?

-Sophie: Many of the problems the European Union is facing are due to economic struggles. I learned more about the economic interactions between European countries and was especially interested to hear the perspective of two European students in our roundtable group. They emphasized the importance of nationalist sentiment in causing conflict between European countries but also were adamant that the European Union will not be breaking up anytime soon.
-Sam: I learned how hard it is to write a paper with 20 really smart, opinionated people. [insert laughter] But really, it was a good exercise in policymaking and I gained a lot of insight into how difficult it is for organizations to work together to achieve a common goal.

Photo courtesy of us!

Overall, what was your biggest takeaway from this experience?

-Sam: Well, breaking up was hard to do. I had such a good time learning and living alongside some of the best and brightest in the country. We worked hard but we also played hard. One of the goals of the conference is to promote civilian-military relationships and I definitely feel like I gained a whole new appreciation for our military.
-Sophie: I loved meeting college students from different universities. Also, I learned that I could never live in military barracks but I’m so appreciative of the sacrifices our military makes. I’m also planning to use my newfound knowledge of European politics and other crisis scenarios in my classes and future endeavors.