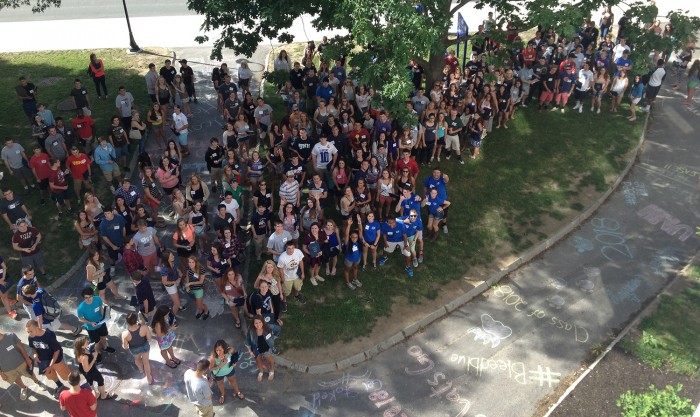 The final exams are over and we’ve all walked across the stage at our high school graduations to receive our diplomas.  Just a few months ago it felt like college was light years away, but here we are going to our college orientation.  I know for me that when I picked out my orientation dates, it seemed as if June 9th was never going to come.  I also know that those two days of orientation, my first night in Durham included, gave me a taste of UNH life that makes me want August 30th to come more than anything.

Chalking done by the Orientation Leaders!

The warning about being prepared for any type of weather during UNH’s orientation isn’t a lie.  I think that all of the freshmen at that orientation realized that it can go from cold and rainy to hot and muggy in a matter of minutes.  For the freshmen that went to the June 9th and 10th orientation, it was a beautiful day on the first day, but by the time the morning of the second day rolled around, it was torrentially down pouring as we were leaving to get our photo I.D.’s taken.  Although we experienced what some New England weather is truly like, I think that I speak for all freshmen when I say that orientation made us want the summer to go by a little bit quicker so the school year can finally begin.

When I talk to my friends who are going to other colleges about their orientation experiences, they all complain about how long and boring it was which makes me feel that UNH spoiled us.  Many freshmen are nervous about what orientation will be like, – how they don’t know anybody yet, who their roommate will be for the night, and picking out their courses for the fall semester – but our orientation leaders made it a point that we were always having fun, even during academic advising.  We always had something to look forward to on our schedules and everything, especially the sense of pride that everyone had for UNH, made the whole experience even more enjoyable.

From meeting with our orientation leaders for the first time, to getting our schedules and officially being able to call ourselves Wildcats, we were making memories that none of us will ever forget.  To many freshmen, orientation is seen as the dreaded introduction on how to be a good college student, but it’s much more than that.  It’s the time where thousands of recently graduated seniors come together for the first time as one.  It’s when we get to see a whole new kind of diversity and we get to be a part of it.  We are leaving our past eighteen years behind us for a whole new chapter of our lives while, and no matter where we came from, we are getting to call ourselves Wildcats.  The four greatest years of our lives are yet to begin and move-in day is just shy of two months away, so get ready, Durham, to welcome the largest incoming freshmen class in UNH history – the Class of 2018!