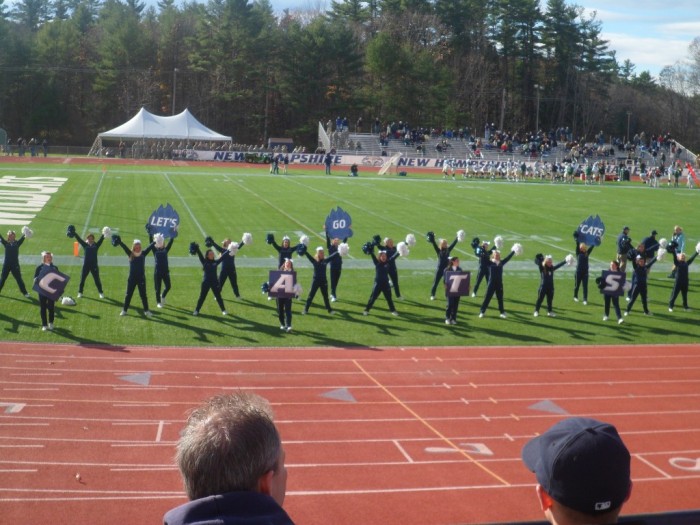 When deciding to come to UNH for graduate school, my academic program was my main focus; anything beyond that was a bonus. Seeing Durham for the first time? Bonus. Finding an apartment close to campus? Bonus. Extracurricular events? Bonus. But a huge plus to coming here was the fact that UNH has a football team! Being raised a New York Jets fan, and then moving to New England, I can’t really bond with many people over the NFL, and I completed my undergrad at a school with no football team… so discovering that the UNH Wildcats play at Cowell Stadium was very exiting!

This past Saturday, November 3rd, I went to watch the Wildcats take on the William & Mary Tribe. A friend of mine from high school attended William & Mary, and came up to visit for the game. Unfortunately for her, I forced her to sit on the Wildcats side of the stadium—and subjected her to abuse from diehard UNH fans. The game was a blast, the fans excited, and by the half the Wildcats were winning 18-7.

At Saturday’s game Marines and Veterans graced us with their presence, for Military Appreciation Day, doing pushups and the like. There was even a dance performance by Dance Revelations in their honor. But the truly special moment occurred during the pre-game ceremony in which retired First Class Sergeant Dana Bowman parachuted into Cowell Stadium with the game ball. A member of the Golden Knights (a parachute team), Bowman is a double amputee who lost his legs due to an accident in 1994. It was truly inspirational to see him and this more than likely inspired the Wildcats for their win! Further, there was a collaboration of a few school bands from the area; during half time they performed the song “Good Time” by Owl City and Carly Rae Jepsen. I was so impressed by the routine; it must have taken a lot of effort to successfully perform! Another plus, if you brought canned food for the NH Food Bank, you were able to receive a discounted ticket! At half time the newest UNH Hall of Fame Legends were introduced and celebrated as well! It was a jam-packed day, with many events.

My favorite part of the game, however, was the last quarter. The Wildcats had many supporters, of many ages. It seemed that family presence outweighed students (imagine eight-year-olds decked out in Wildcats gear screaming for the team—it’s the cutest), and all fans watched fairly quietly… until the end, that is. With the Wildcats behind by four with six minutes left, fans became enthusiasts, jumping to their feet and screaming support for their team. As I mentioned above, the Wildcats pulled through, and the stadium erupted in excitement (and jeers at my poor Tribe supporting friend). Having attended a university for four years that toted “SHU Football: Undefeated” shirts, as a snarky comment on the lack of a team, I am so excited to be here to support the Wildcats! If you’re at the next home game—on November 17th against the Towson Tigers, get dressed up in your UNH gear and come celebrate your seniors!