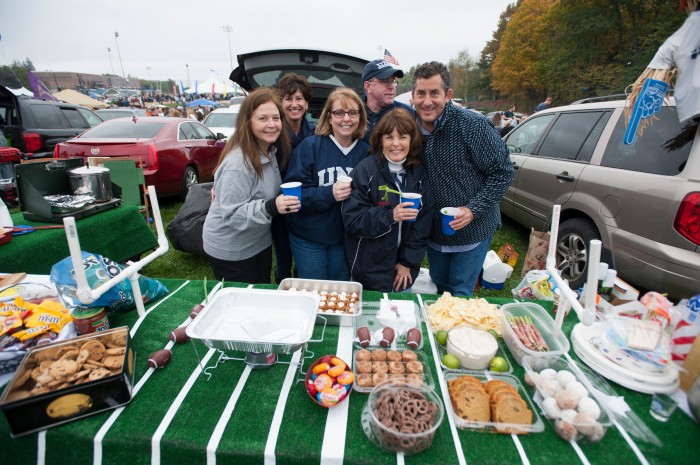 It’s that time of year again!  The time of year when Wildcats from all over the country come back to Durham for Homecoming Weekend to show their remaining Wildcat Pride.  This weekend is chock full of numerous events to entertain all of the visiting as well as current UNH students.  Beginning on Friday, October 10, Homecoming Weekend will officially commence and will be welcoming alumni from the classes of 1989, 2004, 2009, and 2013 and will also be celebrating the 95th anniversary of the UNH Marching Band.

To kick off Homecoming Weekend, UNH will have their annual Bonfire and BBQ.  This event is held on Boulder Field and will have different types of entertainment as well as fireworks to celebrate the commencement of Homecoming.  Also on Friday, there will be events such as T’oe’D Talks, which is put on by the UNH Outdoor Education Program.  T’oe’D Talks are 10 minute talks about outdoor education that are made into TED Talks.  This event is held in in UNH’s Browne Center from 7-9pm.  Also, in the MUB, the Comedy Music of Shock T’s will be performing at 9pm in the Granite State Room.  This is a comedy band from Chicago that incorporates comedy into their music to lead a hilarious night for all of their viewers.  All of these events are free and are a great way to get excited for the football game against William & Mary on Saturday.

Beginning at 11:30am, tailgating at both Boulder Field and Lewis Field will start.  This year, new tailgating rules were set in place at UNH, wherein Boulder Field is reserved for parents, alumni and other guests.  In other words, current students are limited to tailgating at Lewis Field.  To review the tailgating policy that was emailed to students at the beginning of the school year, IDs will be checked upon entering the tailgating area on Lewis Field and wrist bands will be given to those who are legal to drink.  Also, you must present a valid football ticket in order to be allowed into the tailgating area at Lewis Field.  Football tickets will be on sale online at Ticketmaster.com or students can pick up their ticket in the Whittemore Center before the day of the game or the Field House the morning of the game.

Apart from tailgating, there will be entertainment at the Homecoming Pre-Game Fest on Lewis Field such as live music from the Dusty Grey Band, corn hole, a mechanical bull, a bungee trampoline, giant JENGA, Plinko, and even a zip line.  Also, a free BBQ will be provided by Chill Catering.  All of these events will lead up to the long awaited football game, kicking off at 3:30pm against William & Mary at Cowell Stadium. Whether you are a returning alumni, a future Wildcat, or a current student, you are undoubtedly going to have an unforgettable weekend.  From the bonfire on Friday night to the football game on Saturday, these two days will be filled with many events to entertain all of the Wildcats while they are back home in Durham.

What UNH Homecoming event are you looking to the most?