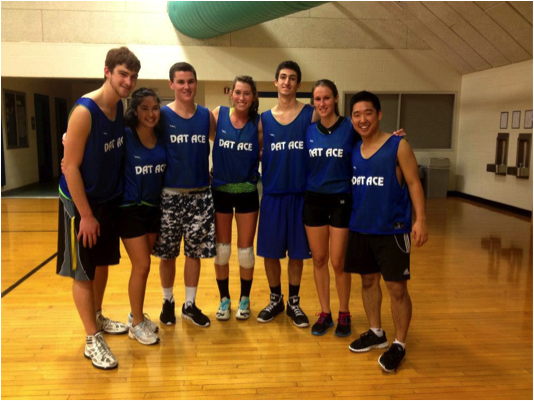 Sports have always been my outlet and I have enjoyed playing at every level.  Growing up, I’ve made many friends through sports, always sticking together – until we all went to college.  One of my biggest fears when I came to UNH was not being able to play basketball or other sports.  These fears vanished quickly when I took my first trip to the Hamel Recreation Center, located right next door to The Whittemore center.

The Hamel Rec Center and “The Whitt” house the hockey arena, where our nationally ranked hockey team plays (this is another blog completely) and it has five basketball courts, a full gym, racquetball courts and other facilities. I found that if I go at the right time I can always jump right into a pick-up basketball game.  The people playing are always welcoming new players, assuming you can make a three point shot!  It’s through these pick-up games that I’ve met a few friends, most of whom played against me in my high school years.  It feels strange to be playing on the same team with these guys, who for so long I played against…

Along with pickup games, the UNH recreation department also organizes intramural sports, which are a lot like pick-up with the exception of an official and a team.  My first semester I played on an intramural volleyball team and I had a blast!  After playing pickup with a team at the gym, they asked me to join even though I had never played before I used my height and athletic ability to my advantage. My team, the Flying Penguins, won three games and after a great run, ended up losing in the semifinals.  Through this team I made some good friends and I also got to try a sport that I had never played before.

Along with volleyball I participated in co-ed Broomball.  I came to UNH not knowing what broomball was but I soon learned that it was like hockey, except the players wore shoes on the ice and played with plastic brooms to push the ball around and score.  I can’t remember one game when I didn’t leave the ice with a smile.  Watching broomball played by unknowing college kids can always provide good laughs, as well as a fun competition!

I knew I wanted to continue to be involved in sports at college, but I didn’t know how and if there would be competition.  After being on campus for only a few days I realized that there were ways – almost too many ways to stay active!  Between pickup games and intramural sports, I’ve made some great friends and had a lot of fun doing it.  Sports have always provided me with an outlet and now in college they provide me with not only an outlet, but a group of friends and a way to keep off the infamous “freshman 15.”

Written by Jacob Lehoux, Class of 2016