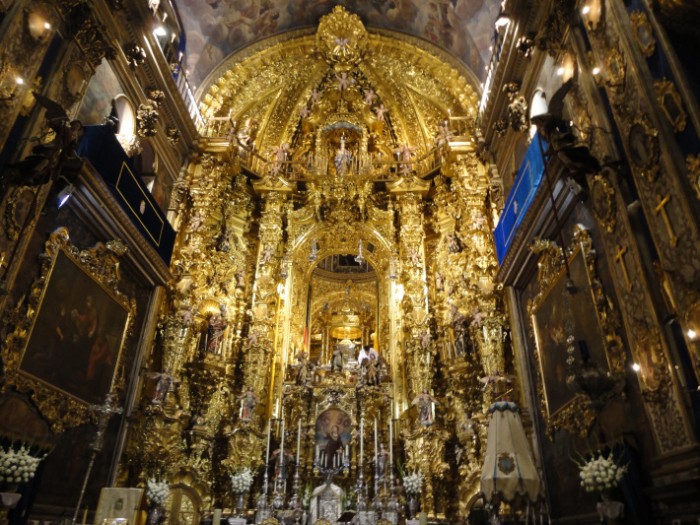 I never thought I would get tired of white bread, but after 10 days in Granada, I have been proved terribly wrong. Bread is eaten with every meal here — you have bread with marmalade for breakfast, and then it is also eaten at lunch and dinner, and you use it to scoop up the juices of your meal; the verb for this action is sopar. Another interesting food commentary: the only two desserts really eaten here (at least in this house) are fruit or yogurt. Want ice cream? Try yogurt that has been put in the freezer! Want something different? Try yogurt mixed with fruit! While I do miss having delicious baked goods after dinner, I suppose it’s for the best, based upon the fact that I am consuming twice the amount of white bread here as I would at home.

When I first came here, Concha kept asking me if I wanted zumo, a word for juice that I had not heard before. I only knew the word jugo; so they were constantly asking me if I wanted zumo and I had no idea what they were saying. Finally I began to understand, and I’m happy that I did because they make absolutely delicious fresh squeezed orange juice. Also, I now drink coffee every morning, which they make with honey and it tastes just heavenly.

Also, in general, the main dishes I have been served have been absolutely amazing. My host family makes fun of me because they’ll ask me if I like something and I always say “sí!” I guess a lot of their past students have been picky eaters because they chuckle every time I say this and exclaim that I like everything: “te gusta todo!“ Today we had shrimp and ham for dinner (a very typical Spanish meal — seafood and ham are two very essential Spanish staples) and when I said that I liked the shrimp, Concha was quite surprised because apparently none of their past students had liked shrimp before. I guess it doesn’t hurt to have an open mind in Spain — it certainly helps improve your host parents’ opinion of you!!

But, besides eating, I have been getting to know the city quite a bit. I am terrible with direction and often have to rely on my friend, Amy, to get us where we need to go. However, I am slowly beginning to understand the city and where everything is situated. Granada is a very manageable city because it’s not that large. And it is easy to orient oneself because the Sierra Nevada mountains are always looming in the background towards the southeast. If it is a sunny day, their peaks are quite breathtaking, topped with snow like a dusting of powdered sugar.

The other day our group went on a tour — one of the ones provided by my school here, El Centro de las Lenguas Modernas. The tour centered around the Baroque aspects of Granada from around the 1600s. One of the most breathtaking sites we visited was a church named after San Juan de Dios. Apparently there are branches of this church in New Jersey and California (the city in California where the church is located is called Ojai and the priest who was telling us this kept saying it like he was saying Ohio without the second O — interestingly, Ojai is the location of the movie Easy A). The church was just gorgeous and absolutely covered in gold. The reasoning for this was because the king at the time had many riches; however, he could not have more gold or riches than God — so he had to make sure God’s home, the church, was especially well-endowed with gold. And that it was:

In addition, what made this church so awesome was that there was a hansom, albeit, random hawk just sitting on a perch in the lobby. He reminded me of Mordecai from The Royal Tenenbaums (while I was just looking up how to spell Mordecai on Google, I learned that his feathers turning white in the movie alludes to the traumatic experiences of the family — oh, what one stumbles upon on the internet). I went to go take the hawk’s picture, but I forgot I had my flash on. So, as my camera lit up the room, Mr. Hawk, alias Mordecai, shrieked and started flapping his wings. It was pretty troubling for all parties involved, but mainly mortifying for me.

Then, when we we passed through the same lobby later, Mr. Hawk Mordecai Senior (I have decided this will be his name) was being handled by a priest. So all of us impressionable Americans stood around them taking their pictures like we were the paparazzi and they were Brangelina. After a couple minutes Mr. Hawk Mordecai Senior got super pissed and started squawking like crazy and attempting to fly away from the priest’s clutches. Well, let’s just say that his calculated squawking diversion worked, and we all ran away in terror.

It must say a lot about me that after seeing so many interesting cultural and historical sites, what interests me the most is a hawk, a creature not all that uncommon in the U.S. Ah, well.

However I will tell you about one such amazing cultural landmark, the Alhambra. As of now I have only seen this famous edifice from afar, but I hope to visit it soon. It is situated upon a hill, and at night magical lights shine upon its towering stone walls. By far my favorite viewing of it has been from El Camborio, a club situated on a neighboring hill. Although I am not much of a clubber (I don’t know if this word can be used in this context, but for now that’s how it’s going to be!), dancing with the Alhambra in the background — its facade astutely glancing down upon its domain, AKA the city of Granada — was just enchanting.

Written by Olivia Marple, UNH Class of 2015.  Olivia will be writing about her experiences studying abroad in Spain for the Spring 2013 semester. You can read her full blog here.