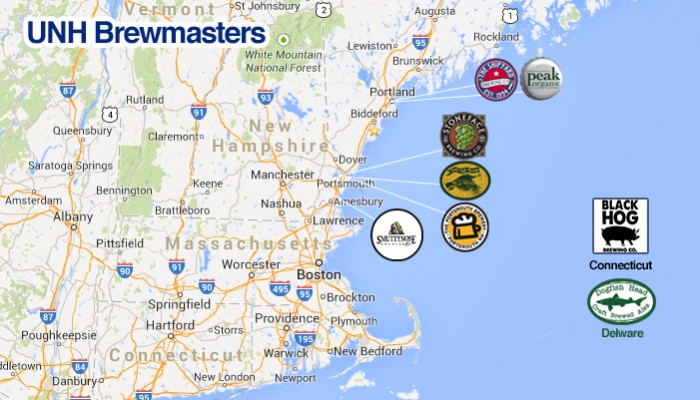 Craft beers have been on the rise for the past few years, but what you probably didn’t know that New Hampshire is ranked 30th in the United States for production of craft beer with 69,164 barrels per year. “New England is one of the oldest beer drinking cultures in the United States. The people who landed on these shores were brewers,” says Lauren Clark ’91. Lauren is is a journalist, former bartender and brewer. Lauren was introduced to the world of beer while working as a bartender at the Stone Church while she went to school. She then started home brewing after she graduated UNH with a bachelor’s in humanities. A few years later she was inspired to start freelance writing about beer. Lauren’s newest passion is her clever book, Crafty Bastards.  “These breweries stay small and they stay local, its kind of in keeping with the New England Yankee character that has been around since the pilgrims landed, and Crafty Bastards tells that story.” Lauren isn’t the only Wildcat that has caught the craft bug. Quite a few University of New Hampshire Alumni have gone on to found their own craft brewery and/or become a brewer of a craft brewery. These Wildcats are brewing up something great!

George Heilshorn aka “Butch”  ’83 graduated UNH with a degree in Business Administration. Butch’s sister, Gretchen (Heilshorn) McDonald ’91 graduated with a major in Communication. Butch works along side Alex McDonald as the Co-Founders of Earth Eagle Brewings. Gretchen and Alex McDonald own A&G Homebrew Supply nestled right next to the Earth Eagle Brewery on High Street in Portsmouth. This nanobrewery (less than 4 US beer barrels (470 L) brew system) is famous for it’s tasting room that usually has six beers on tap and will house about 20 people. This tasting room is almost always at capacity with 20 people enjoying a Wheat Pale Ale, IPA, or even a Cock Ale (You heard right! There is meat in that beer!) From the moment that you walk into the tasting room you feel as if you belong to this unique family. Everyone that works there is nothing but friendly and most importantly interesting to talk to. Earth Eagle continues to surprise Portsmouth with its unique brews and amazing atmosphere. It will take a lot for anyone else to come in and match their environment.

Peter Beauregard ’00 graduated UNH with a degree in communication with a minor in business. Peter began brewing at home while still in college. No, he did not brew in the dorms. Don’t get any ideas Wildcats! Peter became known in the craft brewing community as the home brewer and soon took that reputation to the next level. Peter went on to become the founder of Stoneface Brewing. Stoneface is located in Newington on 436 Shattuck Way. It is in an industrial building that you may drive by at first glance, but when you step inside you will be shocked to see what is inside! Stoneface Brewing is home to the Stoneface IPA. This IPA placed first among IPAs at the Boston Homebrew Competition in February 2013. Stoneface’s success will soon have them on the heels of the big guys on campus.

One can’t talk about craft breweries in New Hampshire and not mention Smuttynose Brewing Company. Head brewer of Smuttynose, Greg Blanchard ’93,  graduated from the Thompson School of Applied Science with a degree in food service management. He also attended the Oyster River Schools in Durham. He started out at Smuttynose as a bottling assistant and has worked his way up to head brewer. His journey was not a simple one. He changed jobs within the food industry many times. He even contemplated working in a prison at one point. Greg wanted to find a profession that he was passionate about. Greg is a prime example of how hard work and some Wildcat pride can bring you a long way in life and career. His success may or may not have had something to do with his extraordinary beerd growing skills as well.

Greg is not the only UNH Alumni that works at Smuttynose. Dan Schubert ’02 graduated UNH with a physics degree. Dan works with Greg as the lead brewer of Smuttynose Brewery. Dan started out at Smuttynose filling in for a friend. Dan’s friend just happened to be the neighbor of Greg Blanchard. Dan’s interest in physics quickly transitioned into an interest in the chemistry of beer. Just like his co-worker Greg, Dan used his determination and hard work ethic to earn the position he has today.

Tyler Jones ’04 graduated with a degree in chemical engineering Tyler is a former Portsmouth Brewpub employee (sister brewery of Smuttynose), just recently began his position as head brewer at Black Hog Brewery in Oxford, Connecticut.  Although, he won’t be enjoying Smuttynose’s new facilities Tyler is very excited to start his own journey with Black Hog Brewery. His impressive knowledge of beer and tremendous experience in multiple breweries aided him in creating a new ale: Red Ginga’ Ninja. This red ale, brewed with fresh ginger, is on its way to becoming a staple of Black Hog Brewery.

Graham Hamblett ’12 holds an associate’s degree in horticulture from the UNH Thompson School. He started his career as a Distiller at Flag Hill Winery in Lee and then moved on to become the Head Distiller for Dogfish Head Craft Brewery. Dogfish Head is a rapidly growing brewery that continues to shock the world of craft brewers with its impressive growth percentages and its popularity of its line of IPAs. The growth of the brewery has branched into the Rehoboth Distillery where Graham is now using his creative Dogfish Head mentality to create vodkas, rums, and gins (or “jin” as Dogfish Head calls it). Graham is excited to see what he will be able to in the near future at Dogfish Head. Graham is catching up to Gregg in the beard growing; so who knows what he could come up with?

David Boyton ’03 is the co-founder of 7th Settlement Brewpub in Dover. David graduated with a degree in Kinesiology (outdoor education) and went on to do everything from being an outdoor education instructor to the director of Seacoast Local. Today, David is writing his very own success story in his hometown. David made an excellent business decision of partnered up with One Love Brewery, also in Dover, and the brewpub has blossomed his business into what it is today. The brewpub has big tables that encourage community interaction and beautiful lighting throughout. 7th Settlement’s daily specials and future outdoor seating combine to make this a must-see brewery. David and his fellow co-founder, Josh Henry, have created a great atmosphere for people to come together with old friends or meet new ones.

Rob Lucente ’01 graduated with a degree in business administration and is now the co-owner of Peak Organic Brewing Company in Portland, Maine. Peak Organic combine their love for beer with an ethic for sustainability when brewing. Peak uses locally grown ingredients to create an delicious beer that they can be proud of. Organic is not the only Wildcat run brewery in Portland. One of the most successful craft breweries calls Portland its home as well.  That’s right, Shipyard Brewing Company was established by a Wildcat!

Fred Forsley ’83 began his education at UNH with taking psychology classes. He then soon made the transition to real estate and ended with a bachelor’s degree in business administration. That business degree helped Fred become the President and co-owner of Shipyard. Luckily, for Fred that change from real estate to business introduced him to the building that was the home of Federal Jack’s Restaurant & Brew Pub. This pub was where Shipyard began its journey to becoming one of the most successful microbreweries in the country. His way of doing business is one to strive for. Fred’s entry into the beer world was different than the rest of our craft brewery friends, he focuses on the marketing side and then had the rest fall into place. Shipyard is still growing even to this day and is continuing to try and broaden their brand further.

Wildcats are not just on the brewing end of craft brewery industry. Farm to Pint is a company based out of Peconic, New York that grows hops for several craft breweries. Andrew Tralka ’04 and Jaclyn Van Bourgondien ’04 are the Wildcats who are cultivating local craft beer movement from the ground up. Andrew graduated with a business and international economics degree and Jaclyn graduated with a marine and freshwater biology degree from UNH. Farm to Pint provides an opportunity for beer enthusiasts to experience a beer that has been brewed by their local brewery and grown by their local hop farmers.  Last season they sold both wet hops & limited quantities of dry hops to a handful of microbreweries & homebrew shops in the Northeast, including Portsmouth Brewery, Earth Eagle Brewings, A&G Homebrew Supply. Portsmouth Brewery created their Hop Harvest #1 in September using fresh wet nugget hops from Farm To Pint which were delivered to the brewery the day after harvest. A&G Homebrew of Portsmouth was able to offer Farm To Pint wet hops for sale, giving homebrewers the unique option to brew a once-a-year batch of their own wet hop ale. This Wildcat couple has teamed up to become a force to reckoned with!

New Hampshire has proven to be the promise land of craft breweries and with recent adjustments in state legislature it has become less difficult to establish one. These changes have made it easier and less expensive to obtain a license. Earth Eagle Brewings along with 7th Settlement are two nanobreweries that have benefited from this change. The future for craft brewing in NH looks as if it has a bright future and we hope that UNH continues to contribute to its booming success. Let’s not forget to grow some epic beards in the process!

Did I miss your brewery? We don’t want to leave out any fellow Wildcat Alumni! Contact us on the UNHTales home page to let us know.

NOTE: Thanks to Steve Galante ’15 for his assistance and editing of the video content.