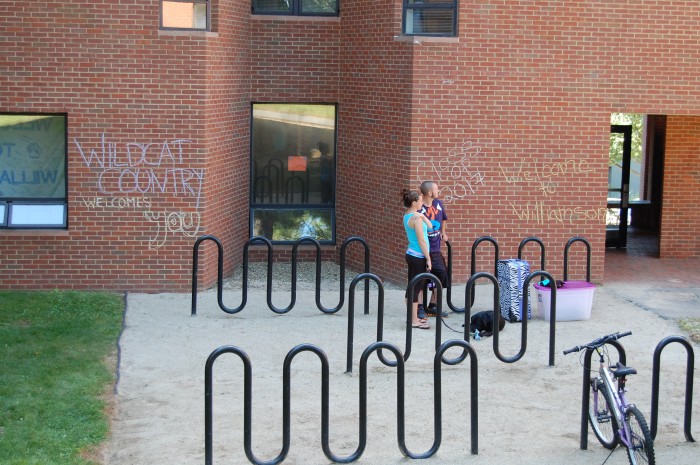 As I’ve mentioned in previous posts, part of my job as the assistant Hall Director in Williamson Hall is to supervise the Williamson Hall Activities Council.  WHAC is responsible for planning academic and social programming, facilitating the purchase of  t-shirts and other “swag” for the hall, and more!  We had elections at the beginning of the school year, and I meet with both the executive board and the general council weekly.

Throughout the semester we’ve had some really awesome stuff going on.  At the beginning of the school year we held a “Club Willy” dance party, featuring two of my friends who are a DJs and a part of UNH EDMC.   We used our hall council funds to provide entertainment, decorations, glow sticks, and refreshments for the residents of Williamson.  In October, a bunch of the RAs and hall council members got together to participate in the Homecoming Parade. We painted a banner, got decked out in UNH gear, and walked with Christensen all the way to Boulder Field!

This month WHAC is busy putting on events before the end of the semester and finals hit.  On the 12th, we had the opportunity to host hypnotist Paul Ramsay, who also performed in the GSR for the student body at the beginning of the school year.  It was absolutely HILARIOUS – a bunch of the residents and RAs got hypnotized and they put on quite the show.  On the 18th, we’ll be having an ice cream social in the basement of Williamson during the Patriot’s game, provided by UNH Dining!  Finally, on December 7th, Williamson and Christensen will be taking a trip to New York City together!  Students had the opportunity to sign up with their friends, and can spend their time in NYC however they want!

I think that’s it has been a very successful semester for the Williamson Hall Activities Council – I’m looking forward to the brainstorming sessions we will have for next semester’s events.  WHAC is just another reasons why UNH is so great!