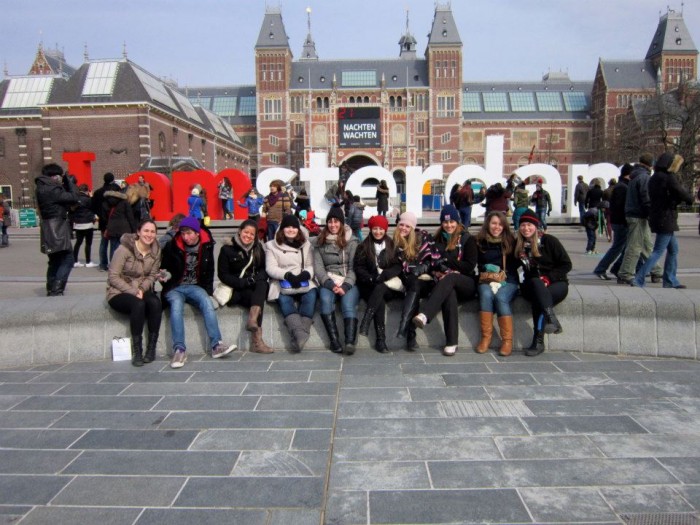 Hi everyone! Thanks for reading again, I’m in the midst of a cold week in London but hopefully that will be ending soon.  We received a couple inches of snow earlier in the week, which as I’ve said before is a rare occurrence here.  Speaking of cold, I spent the last weekend in Amsterdam – an enjoyable but freezing cold trip.  We arrived on Thursday night around 9 p.m. at the airport in Amsterdam and returned to London at noon on Sunday. Eleven of us – my largest traveling group yet – roamed the streets of Amsterdam for the two full days of our stay…

After arriving, we figured out the train system and made our way to the Muiderpoort train stop.  Although the names of the stops appeared in Dutch, a language alien to everyone in the group, we soon found out that everyone in Amsterdam also had a decent understanding of English and we had few communication issues.  After leaving the train station, we found our hostel in what was, in my mind, a surprisingly speedy manner.  Later in the weekend we would find that the hostel was further from the city center than we would have liked, but for the time being it was the perfect place to shelter us from the frigid, blustery winds that roamed Amsterdam.

Once we checked in, I was put in a room with six friends from Regent’s.  Our other four friends were in a room down the hall, which we soon discovered to be the better of the two.  About five minutes after settling into our room and turning up the heat, we looked at the window to find a hole leading through the wall and into the freezing air outside.  Upon further examination we found that part of the window was boarded up with cardboard and had been hidden by the curtain in front of the window.  After complaining to the front desk, the hostel workers told us that unfortunately there wasn’t anything we could do and that we would have to turn up the heat.  Resigned to being cold all weekend, we bundled up and slept in most of our layers to avoid the cold seeping inside.

The next morning, we woke early and took the tram into the center of the city.  Surprisingly, the public transportation was much less organized than that of London and we were waved onto the tram without paying a fee.  Although some of my friends had to pay for every other tram ride, I somehow ended up in the part of the line that got ignored and used public transportation for free the entire weekend.

After arriving in Dam Square, the center of the city, several minutes later, we were amazed by the Dutch architecture and the beauty of the square.  We were surrounded on all sides by imposing Dutch buildings.  As we explored the city further, we found the buildings and canals fascinating.  However, our main concern at the beginning of the first morning was breakfast.  Excited to try the Dutch pancakes advertised all around the city, we found the first breakfast place that could fit a group of eleven and sat down to our first meal in Amsterdam.  I ordered a plain Dutch pancake, which came thin and covered with powdered sugar, crusty on the edges but soft on the inside.  Although I’ve resigned myself to the fact that maple syrup is a New England entity, I did try the golden syrup they served with the pancake.  It was gloppy and overly sweet, so I stuck to the powdered sugar and still enjoyed the pancake immensely.  However, the thin Dutch pancakes aren’t quite as filling as the thicker ones I’m used to at home, so I was still hungry even after breakfast.