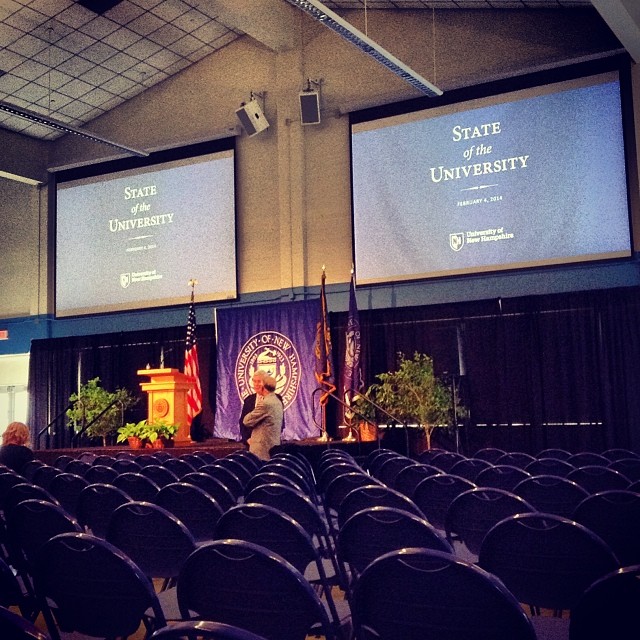 After President Huddleston took the stage, he began by stating that he was truly happy to be standing at the podium today, an improvement from 2011. Huddleston then said how “we really do have a lot to celebrate as we enter 2014” and from there, began listing one achievement after another which made everyone in the audience affiliated with the university proud to be a Wildcat.

Highlights of the year included UNHWorks (an advocacy group of alumni, students, parents, faculty, staff, and voters that works together to convince lawmakers to restore public funding), a tuition freeze, and for UNH Manchester, a new emerging technology center and STEM discovery lab. And that’s not all! Last September, the first multidisciplinary marine science and ocean engineering program opened, too.

Huddleston went on to discuss the increase of globalization boasting that “83 countries are represented here at UNH” — an impressive fact for a school in New Hampshire. He then called the UNH community a family, a statement that I would bet almost every student, faculty, and staff member here would agree on.

The attention was then turned to what UNH students, past and present, have been up to. First up were athletic achievements, the highlights including the field hockey team, the volleyball team, and the football team, who made it to the semifinals for the first time in school history! Alums were also praised, notably Jennifer Lee, the UNH alum who wrote and directed Disney’s Frozen and has already won a Golden Globe for doing so.

A sobering graph showing how enrollment is rising and state support is still falling was displayed, enraging President Huddleston. Huddleston says he refuses to make cuts that will affect the quality of services provided here at UNH. When asked by the state legislature why UNH can’t be like other low cost providers Huddleston said, “I’ll embrace the day I see them drive across a suspension bridge built by an engineer with a degree from Online University of America” — a statement that led to an impromptu round of applause.

Huddleston concluded his address by outlining five strategic priorities for moving forward — enrollment, branding/marketing, STEM education, research, and philanthropy. Before he left the stage, he thanked the UNH community for “all you do and all that you will do.”

The State of the University address is available online for those interested here!