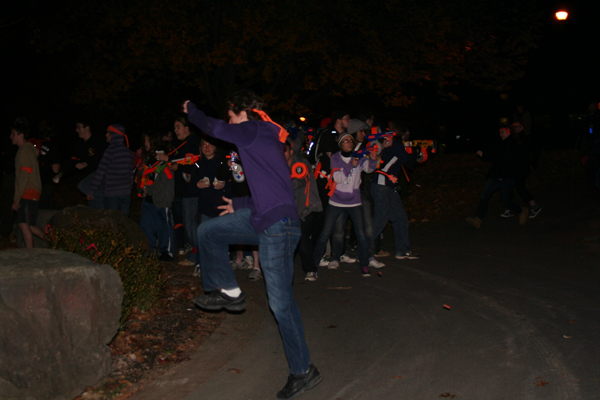 One night behind Kingsbury, a male student drops into a combat-stance and levels a Nerf gun at a group of four people huddled together, slowly approaching him. “Are you human?” he bellows. The approaching figures do not answer, and he gestures his Nerf gun in warning once again. He begins to advance on the huddled crowd. “Yes,” confirms one of the crowd, “we’re human. Don’t shoot.” The student breathes a sigh of relief, and greets the group warmly. They understand his caution. The initial student, who’s name is Michael, is disappointed to find his girlfriend Kathleen, who he got separated from in this mission, is not among the fellow humans he just met.

Ten students are loitering in the vaporous orbs of yellow light from the lamp posts around the courtyard by the Dimond library. Some are restlessly hopping up and down off the stone benches. Most are chatting eagerly. All of them are wearing bright bandanas around their heads. Long-haired students readjust their bangs out of their eyes by re-tying the bandanas. They wait, they pop their knuckles, they breath gouts of steam into the cold November air.

“There’s some!” someone shrieks, and points down towards Main Street. “Get ’em!” and the crowd with headbands breaks out of their dangerous street-gang saunter into an all out sprint. The shoes on the cobblestones sounds like a herd of stampeding horses. The group without headbands breaks left, running towards Thompson Hall. They can not run the opposite direction because they are pinched between two groups of head-banded students.

The pursuers corner their prey under the iconic turrets of Thompson Hall. UNH’s postcard building looms in the moonlight like a gothic castle. Most students are out of Nerf ammunition. In the midst of a frenzy of tagging, Michael drops his empty Nerf gun and makes a desperate leap through the stone arch in the side the Thompson awning. He lands past some mulch, and as he starts to sprint he feels two hands grab him. He turns, and sees a familiar face.

The student who tagged him is Kathleen. She is wearing a headband. “Kathleen,” gasps Micheal, out of breath. “No. They got you too.” Michael removes the band from his arm, and puts it on his head. His new job is to hunt humans. He’s a zombie now.

What They Are Doing:

Human’s Versus Zombies is a popular game on the UNH campus. The rules are simple: if you are a human you wear an arm band, and if you’re a zombie you wear a headband. The zombies try to tag all the humans they see. When you get tagged, you turn from human to zombie. The humans can temporarily repel the zombies with Nerf guns or thrown sock balls or marshmallows. The game lasts one week, and zombies can tag humans anywhere outside. This means on the way to class, the dining halls, or work. Here’s a full rundown of the rules.

If you’re a current student and you feel your college experience may be stagnating, give a game like this a try. Check here to see what a rich variety of activities UNH really offers. Humans vs. Zombies is a great one because it’s free to play and adventurous mellow-drama like the stuff above can be yours. You need only reach out and take it.

If you’re a senior in high school, this may give you a flavor of campus life here at UNH. Even if you’re not playing, you may see a Human and a Zombie circling each other like wolves outside one of the dining halls. They both just want to eat.

There’s fun to be had!