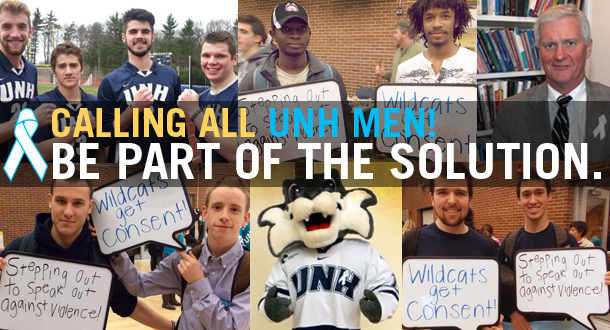 I hope everyone had a fun, relaxing, but most importantly safe spring break! April is coming up very fast, and is recognized nationally as Sexual Assault Awareness Month. Here at UNH we also have the White Ribbon Campaign running during the month of April. This campaign is rooted from a massacre in 1989 at The University Of Montreal. A gunman killed 14 women then killed himself. His suicide note stated the reason for this act was he felt feminists were the reason for his failure in life. In 1991 Canadian males started the White Ribbon Campaign to oppose violence against women, gender inequality, and remember this massacre. This campaign is the world’s largest movement of men and boys working to end violence against women and girls, promote gender equity, healthy relationships, and a new vision of masculinity. At UNH, this campaign is meant to inspire men to “Be Part Of The Solution”. We want to live in a culture that violence against women is unacceptable, and men have the ability to help!

When and why did you become part of UNH SHARPP?

I became a part of SHARPP because in Fall 2013, I took the advocate class and became quickly involved. Following my training, I took the community educator training, took on a large role in the UNHWRC and tried to be on call as many times as possible. The reason I decided to join is because I saw WildActs during my Freshman year and thought the performance was very powerful. I thought to myself what can I do to make my campus a better place? I went back to my dorm and looked up how to get involved. I saw there was a class offered in the fall. I couldn’t do it that fall so I took it the following year.

How is this year’s UNH White Ribbon Campaign different from past years?

This year’s UNH White Ribbon Campaign is different. For many years we had been doing an online pledge. Many students thought they did it once so that was it and it became hard to get to students. This year we are doing a UNH White Ribbon Ambassador program (taken from the New Zealand White Ribbon Campaign) where members of the community nominate a man who values the ideas of the pledge. We still want people to make the pledge to “Never commit, condone or remain silent about violence against women” and to still were a white ribbon.

What qualities are you looking for in a “UNH White Ribbon Ambassador”?

We are looking for someone who has taken the pledge to never commit, condone or remain silent about violence against women. We are looking for men who have helped to end violence on campus either through fraternity and sorority life, academics, athletics, or whatever. We want to show other men that they can be a part of the solution and can help our campus become safer.

Who can be nominated? And how do you nominate someone?

Anyone who identifies as a male can be nominated for this campaign. Nominating is done through Qualtrics at this link: https://unh.az1.qualtrics.com/SE/?SID=SV_7VV21jtISXVdGTz

What is the purpose and goal of this campaign?

Men are known to be the number one perpetrators of these crimes and we know that men are not likely to use our services or become an active part of the work we do. This campaign is designed to get men more involved with ending violence against women. We want more men to stand up and say enough is enough and I am part of the solution. This will take everyone. If this campaign can get more men to take up the pledge and be part of the solution then it was successful

Overall what has your experience been like at UNH SHARPP and with the UNH White Ribbon Campaign?

I have loved every minute of my job at SHARPP. Working at SHARPP has allowed to me to realize what I want to do for my career. I want to work with college survivors of sexual harassment, stalking, rape etc. I think this is a great environment to work with and that it’s a great place to help. With the White Ribbon Campaign its definitely had it’s ups and it’s down. It can be very complicated running a campaign but its been well worth it. Knowing that I may have gotten one more person to take the pledge to stop violence then it was well worth it.

Ryan has done a phenomenal job at SHARPP and with the UNH White Ribbon Campaign. If you know anyone who fits the criteria of being a “White Ribbon Ambassador” nominate here!