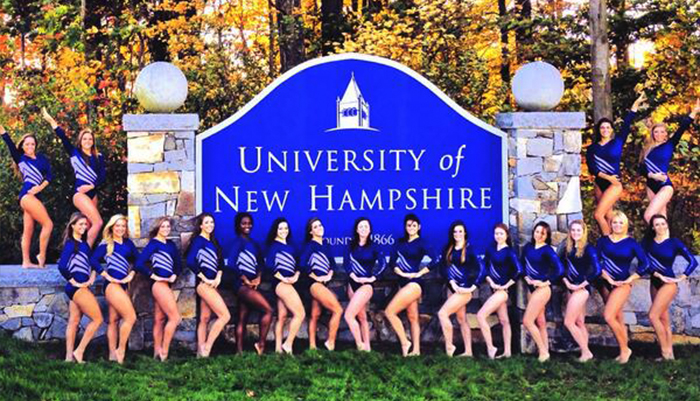 When I was little, my sister and I were obsessed with gymnastics. During summer Olympic years, we would watch the women compete and race outside the next morning to imitate what we had seen the night before. We set up the backyard into our own personal gym complete with uneven bars (swing set minus the swings), beam (2 x 4 balanced on sawhorses), vault (a cooler filled with water to weigh it down), and a floor exercise which was the remaining area. Even though I am no longer a would-be gymnast, I’m still a huge fan of the sport which is why I was excited when I heard the 2014 EAGL championship would be held in UNH’s own Whittemore Center.

There were 8 rotations total with UNH competing during rotations 2, 4, 6, and 8. Each team had 6 athletes compete on each apparatus and every score counted towards the team total. The scoring system is out of 10 (10 being the best) so the maximum number of points a team could get on one apparatus was 60, the highest a team could score at the meet was 240.

UNH started on the precarious balance beam and ended rotation 2 with a solid 49.175 which put them into first place. They came back during the fourth rotation to compete on the floor and tumbled their way into first place again with a score of 98.575! Vault was the third apparatus UNH competed on and maintained their first place status with a score of 147.450. UNH’s final event was the uneven bars and the official announcement of who won the meet was withheld until the awards ceremony.

After athletes from all teams were recognized, it was announced that UNH had won the meet with a total score of 196.375! Second place was awarded to the University of Maryland and Rutgers University and North Carolina State tied for third. UNH will advance to the NCAA University Park Regional Championships on April 5th at Penn State University. Congratulations to all of the UNH Women’s Gymnastics team!