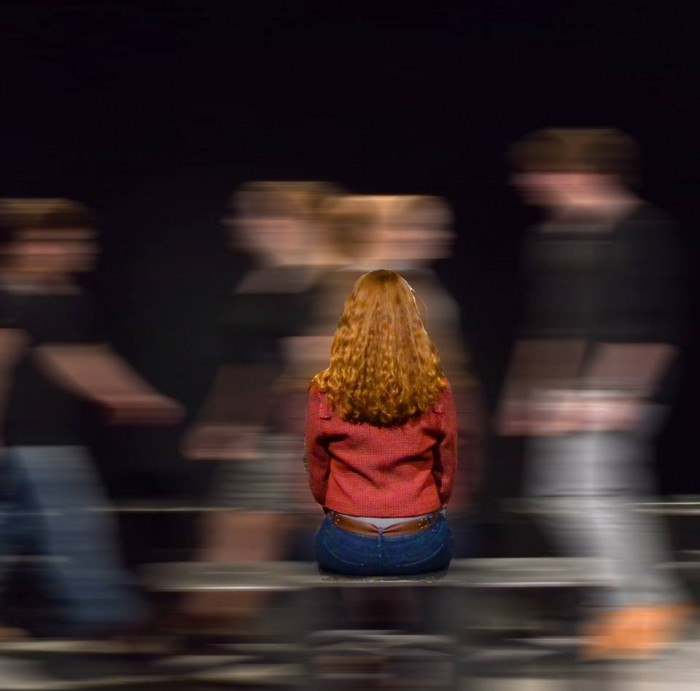 From “To the Gap”. Photo by Ron St. Jean Photography.

The 2015 John C. Edwards Undergraduate Prize Plays opened Wednesday in the Hennessy Theatre. The show features three original plays, written by undergraduate students at UNH, and selected by a committee. Each play is then assigned to a student director, and cast with student actors. In addition to what you’ll see onstage, students are responsible for jobs like set building, stage managing, and operating the lights and sounds. This amazing opportunity for student collaboration comes once a year, and is made possible by generous donations from UNH Alum Mike O’Malley, Class of ’88. Mike O’Malley is an actor, known for his roles as Andy Shiraz in the movie Eat Pray Love, and Burt Hummel in the popular TV show, Glee. He studied theater here, under Professor John C. Edwards, the award’s namesake, who sits on the play selection committee alongside O’Malley.

From “The Last Testament of Ethel Rosenberg”. Photo by Ron St. Jean Photography.

This year’s plays, in order of performance, are:

“The Last Testament of Ethel Rosenberg”
Written by Joe Juknievich, Class of 2016
Directed as Kristen Henrick, Class of 2015

The final play of the night was Kristen Henrick’s directing debut, and will also serve as her senior capstone project. She appeared jittery before the lights went up; she said, “I’ve never had to sit in the audience of something I’ve directed myself. It feels like sending your first child off to preschool!” Henrick told me that the process of working with the playwright, Joe Juknievich, was very helpful, because they cooperated to adapt the piece specifically for the space and budget. Juknievich also felt that the process helped him to think about his piece in new ways, and was thrilled with the product of their work. He said, “Kristen took to the piece immediately and when I knew she had a solid concept, I was happy to accommodate her vision anyway I could. I knew the story was in good hands.”

Henrick expressed that so far, the piece has evoked some great reactions, both from the dress rehearsals and opening night, and that she’s excited to see how the next few performances go! The Undergraduate Prize Plays will be performed again tonight (Thursday), Saturday, and Sunday in the Hennessy Theatre. Tickets are available, and only $5 for students and non-students. All three plays showcase the incredible amount of talent we have here at UNH, so don’t miss your chance to see them performed this weekend!

Newer PostCollaboration and Conflict Resolution: A Week in the Big Apple with UNH Model UN
Older PostSpring into Social Justice at UNH