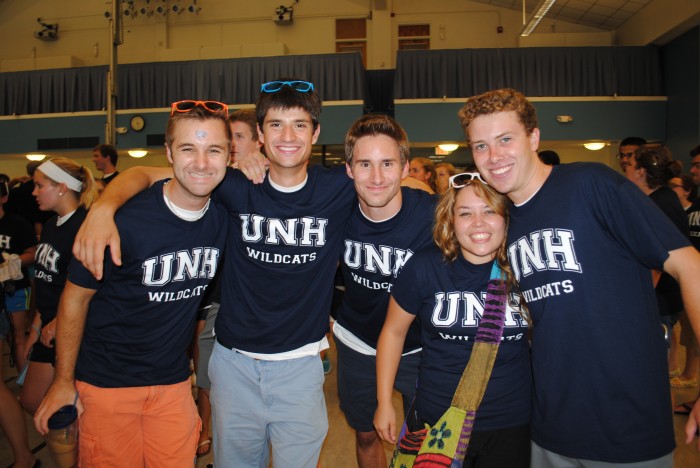 “Today’s a great day to be Wildcat!” shouted a group of UNH students and staff decked out in blue and white garb, body paint, and accessories.

“Every day is a great day to be a Wildcat!” answered the crowd surrounding them.

If you’re familiar with UNH, you may be picturing this crowd cheering in Ludholm Gymnasium, the Whittemore Center, or even Memorial Field at some sort of sporting event.

This cheering and chanting was in fact in the Granite State Room (GSR) of the Memorial Union Building (MUB).  The group, lead by RHA President and UNH’s “Unofficial #1 Fan” Peter Wilkinson, was comprised of UNH resident assistants, hall directors, move in crew, community assistants, athletes, apartment managers, and ‘Cat Pack Crew staff.  As the assistant hall director of Williamson Hall, I was a part of that group, and got to experience the first ever UNH Spirit Rally Kick Off.  We were gathered there on August 22nd in the midst of resident assistant and community assistant training.  With Wild E. Cat and Gnarlz in the lead, the crowd sang out various cheers typically heard at UNH hockey games (noise makers included).

In addition to the cheering and chanting going on in the GSR, we as UNH community members got the opportunity to know other staff and students from departments and leadership positions around campus.  By playing games like “Splat”, “Wah”, and giant battles of Rock, Paper, Scissors, any “ice” in the GSR was definitely broken.

The goal?  To get everyone pumped for fall move in, and for us as leaders to get students, particularly freshmen, excited about being UNH Wildcats and attending various sporting events and to attend to ‘Cat Pack Kick Off Rally during Freshmen Wildcat Days.  Throughout the event, I snapped pictures, shouted along with cheers, and participated in the games.  The festivities in the GSR lasted for about an hour, leaving everyone smiling, laughing, and breathless.  After the Spirit Rally in the GSR, everyone was treated to a giant picnic outside of Mills, Alexander, Fairchild, and Hetzel Halls, with the opportunity to mix and mingle together.

The results of this Spirit Rally Kick Off were evident during Freshmen Move In Day, particularly at Williamson Hall.  My job that day was to make sure the move in process inside of Williamson was going smoothly.  Not only was this year’s Freshmen Move In the most successful in recent memory, but many of the resident assistants and move in crew of Williamson Hall were full of Wildcat spirit.  Several times throughout the day, despite the fact that they were lugging fridges and lamps, move in crew could be heard chanting UNH cheers throughout the stairwells, bringing smiles to the faces of students and parents alike.  Resident assistant donned UNH RA t-shirts, temporary paw print tattoos, and face paint.

In addition, there was record attendance for the ‘Cat Pack Kick Off Rally during Wildcat Days, with the majority of the resident assistants, hall directors, move in crew, community assistants, athletes, apartment managers, and ‘Cat Pack Crew on the floor of Ludholm Gymnasium leading cheers.

I would say, it’s a great day to be a Wildcat.