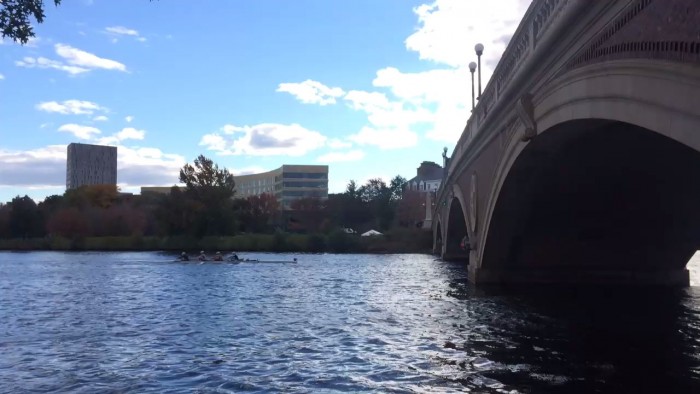 The Head of the Charles is a regatta (rowing race) that started in 1965 on the banks of the Charles River between Boston and Cambridge, Massachusetts. Now with over 400,000 people coming to see the events and another 11,000 racing, the regatta is one of the biggest in the world. This year the UNH Rowing Team had two Women’s boats entered, a 4+ and an 8+ for the Varsity team. Friends of UNH Rowing, the Alumni Rowing organization, also had both a Men’s and Women’s 8+ entered as well.

When September hits every year, the varsity rowing teams come back to campus train. However, for this race the students have been training since the beginning of the year, starting in January on the ergs (rowing machines). Fighting their teammates tooth and nail for the opportunity to race in the event is what makes this event so competitive, only the best of each team can go. Earning its spot with a 10th place finish in last years regatta, the women’s 4+ started 7th in the field of 35 this time. With stiff competition this year the girls knew that they would have to battle their way to the top.

Building up to this years Head of the Charles (HOCR) has been a rough time on the women though. Last year, during the Fall semester their Varsity coxswain’s mother, Susan Harning, was diagnosed with stage4 lung cancer. Whenever the team raced she was there for them, cheering them on. Even after she fell ill, trying to get the doctors to discharge her from the hospital, she still attended the Head of the Charles in October. According to her husband, it was on Susan’s bucket list and she was determined to be there to cheer her daughter on. A month later on November 27th, Susan passed away.

Since that time the family and team have been dedicated towards purchasing a new Vespoli 4+ for the Varsity Women. All last year they spent countless hours fundraising and getting donations on behalf of the Harning’s. With the help of students and their supporters the team was able to raise enough money for a new boat. According to Courtney O’Brien, the President of the Women’s Rowing Team, “A few weeks ago we found out that we would have a new Vespoli 4+ in Susan’s honor; her daughter chose to name the boat the Susan L. Harning.” The boat, which was recently finished, was delivered  just in time for this year’s Head of the Charles Regatta.

A year after their journey began, the boat was dedicated at the Charles. The women, having large shoes to fill, rowed one of the most difficult courses. With last years 10th place finish if the girls didn’t repeat or at least make top 50% then they wouldn’t earn an automatic bid for next year. Finishing in a time of 19 minutes and 30.9 seconds, .28 seconds ahead of 2nd place Nova Southeastern University, the UNH Women’s 4+ won. For the first time in UNH History, UNH earned a Gold medal at the Head of the Charles, a huge feat for the club sport.

Women’s 4+ at The Head of the Charles where they won Gold.


Women's 4+ at The Head of the Charles where they won Gold.