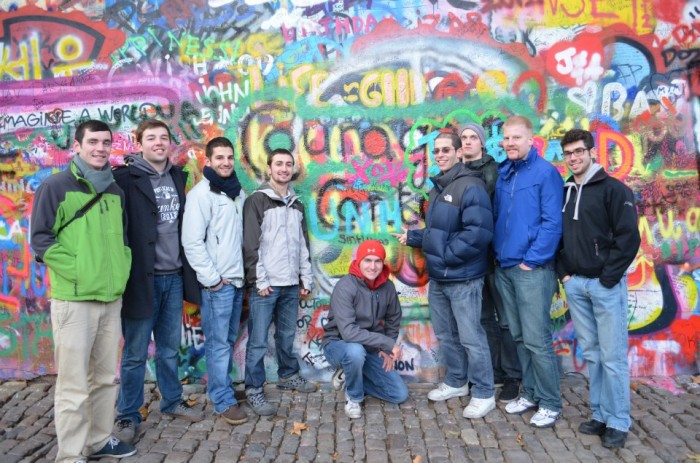 I visited Prague, Czech Republic this past weekend with the rest of the UNH guys in my study abroad program.  It’s an absolutely beautiful city; cobblestone streets, big squares, old medieval towers, The Charles Bridge, known around the world for its beauty and more.  It’s also home to the largest medieval castle in the world according to some (It’s more of a palace than a castle).  Undoubtedly this place, like many others that I’ve visited while on my adventures in Europe, left its mark on us.  But, this time we left our mark as well.  One of the many sites we saw while in Prague was the John Lennon wall.

The John Lennon wall is a tall cement wall tucked away on a side street near the Charles Bridge in Prague.  It has been a canvas for “Lennon-inspired” quotes, symbols, art, political grievances and more since before the fall of communism.  Czechs would write their grievances with the communist regime on this wall and there was once a spectacular portrait of John Lennon painted on the wall.  Unfortunately, this portrait has long since been covered by paint.  Authorities once tried to paint over all of the graffiti only to find it covered with quotes and artwork again the next morning.  Students even confronted authorities about the wall once on the Charles Bridge and were charged with “Lennonism” (see the irony?).

While we enjoyed looking at other peoples’ expressions on the wall, we felt like we had to contribute to such a historic, social monument.  Along with a few others who were painting on the wall that day, we tagged ‘UNH’ on the wall with some borrowed paint and left our mark on a very historic wall.  This is one of few places where graffiti is both tolerated and encouraged and we just had to take advantage!