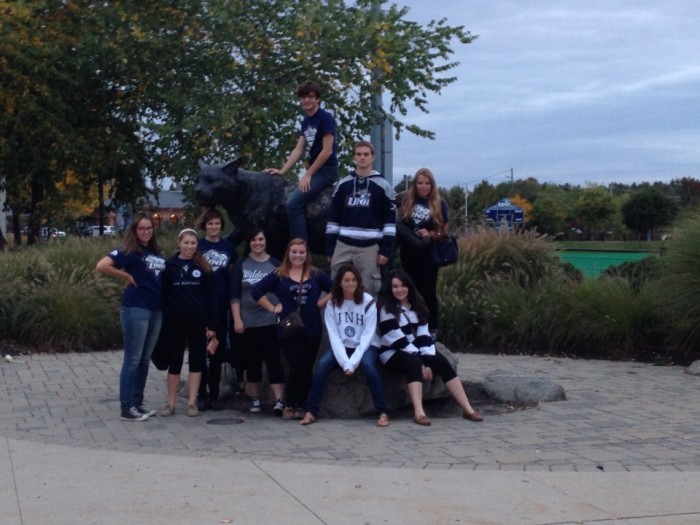 One of the best community events on campus are hockey games. Particularly, well at least from experience, the men’s hockey games. The tickets sell out and on game day the Whittemore Center fills with fans ready to cheer on the Wildcats. No matter if you’re a lifelong fan, having grown up with UNH in your home, or a first year fan, the men’s hockey games are the place to be on game night. And this past Saturday was no exception. With Parents’ Weekend came the start of the 2013-14 hockey season. The women’s team took the ice first on Friday, falling short against RIT, and then collecting a win Saturday afternoon against Syracuse. The men’s team skated into their season at 7pm on Saturday, welcomed by a sold out Whitt.

I arrived around 6:15 with a group of my fellow Fairchildren. Our group was made up of so called “hardcore” fans as well as the freshmen and international students who had never experienced the Wildcats like they would that night. Even as we got there, a solid forty-five minutes before the puck drop, there were large groups of students already gathered in the Cat Pack section of the arena. Parents and members of the community started to file in shortly after. And as the size of the crowd grew, so did the energy and excitement. All of this came to a boil as, as always, Gnarlz and Wild E. Cat took the ice for their pregame rallying of the fans. And then, the moment we were all waiting for.

The 2013-14 Wildcats were introduced the ecstatic crowd and then, following the Canadian and American anthems, the first exhibition game began. Acadia, who most students seemed to think played dirty during the game, proved no match for the Wildcats. While the Cat Pack did their usual cheers, the Wildcats finished the first period with a score of 1-0. That first goal also confused a lot of fans since the traditional fish was never thrown onto the ice. Later, it was explained, that the fish isn’t for exhibition games (really, since when?).  Following a contest with preselected fans, the second period went on with Acadia scoring one point and the Cats gaining four more! The crowd when wild as Casey DeSmith, our “Goalie God”, got back in the net. Following another contest and the last period, the Wildcats locked up their victory with a final score of 6-3.

Seasoned fans with Freshman and International students after explaining the UNH cheers.

Now what is so great about the hockey games isn’t necessarily getting to see a D1 hockey team like ours play against other Hockey East Schools. What’s great about the games is the sense of family and community fostered by attending. Nothing makes you closer to someone then a stranger wrapping an arm around you while you do the same as the entire student section jumps up and down and chants “I BELIEVE IN UNH” over and over. It’s really something amazing to witness. So if you didn’t make it out to this last game, try and make it to the next! There will be plenty of Wildcat hockey madness coming up soon!