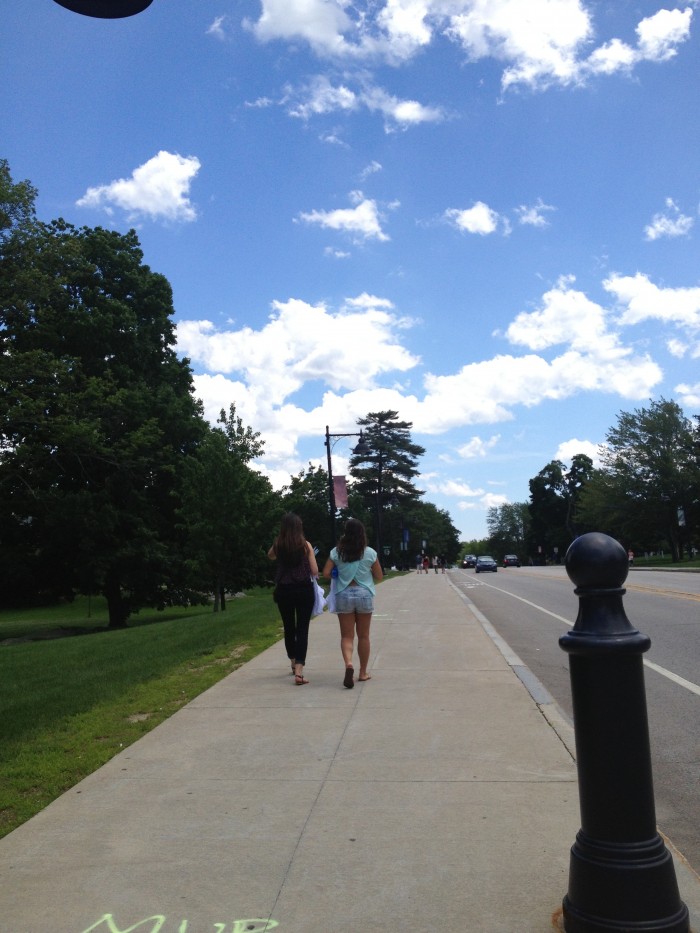 At this time three years ago I was a scared and confused freshmen who didn’t know anyone on campus besides my two roommates and two people from high school. I felt alone and it seemed as if everyone around me knew each other and I was the only outsider. This obviously wasn’t true, but at the time it would have been very hard to convince me otherwise. All I wanted was one friend or one person to help me and guide me through those first few weeks of college. I never got that. That’s why I surprised myself when on the very first day of classes I had the chance to do that for someone else and I didn’t take it.

It happened when I was walking into the MUB and headed towards Hoco. I was right in front of Dunkin Donuts when a small girl with a large backpack approached me. She quietly asked me if I knew where the dining hall was. I told her it was right there in front of her. She smiled shyly and thanked me. I went on my way without thinking anything of it.

As I was swiping myself into Hoco I looked back at the girl and felt bad that she was completely alone and probably not entirely sure of what to do. My boyfriend made a joke about me missing my chance to take her under my wing and make her my “freshman project.” I brushed it off, but the guilt lingered in the back of my head.

As I went to take a seat once I had my food I saw the girl again. She was wandering Hoco trying to find a seat. I wanted to ask her to sit with my friends and I, but for some reason something was holding me back. I then watched as she asked a random girl if she could sit with her. I felt bad that I had missed my chance to help her out.

That was one week ago and since then I have been seeing the girl everywhere: downtown, walking to class, at the bus stop. And every single time she’s been alone.  And of course my boyfriend is always there to point out my “freshman project.” It makes me feel so guilty because whenever I see her I am reminded of myself three years ago.

This has made me start to wonder why I’m holding back and not reaching out to her. I’m not one of those people who think that since I had to suffer, she should too. I think I’m mostly afraid that I’ll embarrass her or that she won’t want or need my help, which would embarrass me for thinking that she did. I would love to befriend this girl or at least just be a person who could answer her questions, but I don’t know where to start.

Thinking about it though, what could I have to lose? We’re just people, both members of the UNH community, and there’s really nothing to be afraid of. So what if she does say no? That just means that she’s ok, and I’d rather her be ok than not. And if she says yes, then I could give her advice or at least just be a friendly face. I know that when I was a freshman I would have loved to have that.

All in all I think we should remember that this is a community and as members of it, we should all be willing to help each other out. We shouldn’t be afraid to step outside of our comfort zones and chat with a stranger we’ve never met before. Nothing bad is going to come from it and not only could you help someone else, but ultimately you could help yourself by opening up to new experiences.