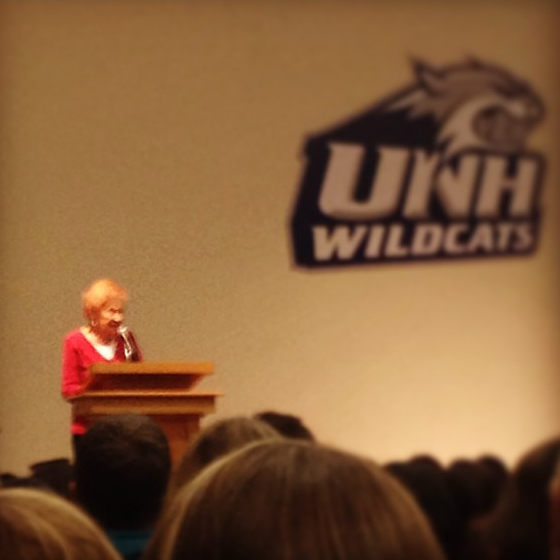 Things people perceive as terrible happen daily—those kinds of things that make a person think his world is crashing down, those kinds of things that make him believe that his happiness will never return. But in this world there are people who take the utmost horrific situations and create a ray of hope out of them. One of these people is Esther Bauer, an 89 year-old Holocaust survivor who spoke at UNH on April 3rd.

Waiting in line to be seated in the already full Strafford Room (they had to add extra seating to accommodate as many guests as they could), I was expecting a somber experience—tales of terror and torture; however, Esther was a shockingly optimistic and humorous woman. Beginning her lecture, Esther explained her childhood in Hamburg, Germany, joking that she was born with the surname Jonas, like the Jonas Brothers, but don’t get them confused, “we’re not related,” she shouted to the crowd.

Jokes aside, the audience waited in silence with baited breath. There was a somber feel to the room as Esther recounted the constant difficulties she faced starting in 1942 when she was sent with her parents to the Theresienstadt ghetto in Czechoslovakia, where her father died six weeks later. Here she met a man who she briefly married before he was taken away, and ultimately killed. Soon after, Esther herself was put in Auschwitz, which she will forever recall as the worst
part of her tribulation. She recalled the terror of being rushed into the showers, never knowing if it was water or gas that would come pouring out. It was in Auschwitz that Esther’s mother, Dr. Marie Anna Jonas, was killed in 1944. Eventually (although, I admit, I do not know the location where this happened), Esther was sent to build airplanes. She joked that her bit of revenge was that, because of her, none of those airplanes would ever fly. Esther would work on the interior of the plane, and use the wrong sized parts, something that could not be checked once the plane was completed! It was here that Esther worked 12 hours a day, was beaten with a belt, and given so little food that they had only one pat of margarine a week (although, Esther admits, she was quite easy on the eyes, so men were often willing to give her extra food). Eventually Esther was shipped to Austria to a camp titled Mautahousen, and here she became deathly ill. This is where she was liberated by the Americans.

Even though I bypassed many major details into the suffering of Esther, and thousands of others, one can easily recognize the horrors she endured daily for years. Although Esther said she does not talk about what happened often, she chooses to speak out to have people of our generation, “learn from it, and see to it that it never happens again.” For those who were there Wednesday night it was apparent that Esther’s appreciation of life is infectious, “Have fun,” she said, “I learned to be happy.” After moving to America Esther married an American soldier and was married for 46 years. Today, she has a “boy toy”…at 89 years-old. I feel honored to have seen this amazing woman speak, her outlook on life after being faced with such massive terrors truly speaks to the indestructibility of the human spirit.

A reminder that Monday, April 8th, 2013 is the 60th anniversary of Yom Hashoah, the Jewish Holocaust Remembrance Day.