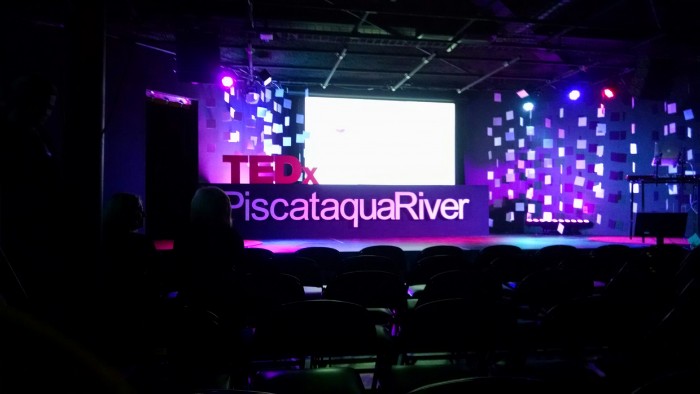 On Friday, May 8th, I got to take a much needed break from finals stress to attend a special event at 3S Artspace in Portsmouth – TEDx Piscataqua River! The University of New Hampshire was a lead sponsor, and a few students

such as myself got the opportunity to attend. Throughout the day, I ate some delicious food from Block Six, met some very interesting people, and got to watch presenters from all over the country share their amazing experiences and ideas.
My day began when I arrived at 3S Artspace, with a nice cup of coffee. As people filed in, I read name tags and took in my surroundings. The presentation space wasn’t open yet, but the lobby and café of 3S fit everyone comfortably, which, combined with the small but enthusiastic crowd, created an atmosphere that felt hip, fresh, and inviting. As the time grew closer to 10:00 am, the room buzzed with excitement at the prospect of getting the presentations started. The doors to a small auditorium opened, and we took our seats.

Screens lit up with slowly recombining bright colors, and we heard calming, synthetic music filling the room. The audience entered a kind of group meditation, and we sat for ten minutes or so, observing the visual and auditory movement around us. The performance was called Light Beings, by artist Colors in Motion. This opener left everyone feeling relaxed, and open minded; ready for more. Nicole Galovski was the next to take the stage. The Director of Programming for the New Hampshire Film Festival would be our Emcee for the day. She told a few jokes, and shared her excitement with the crowd for all the “idea sex” that would be happening in that very room throughout the day.

Next was an official video from TED, welcoming everyone to this individually organized event. Nicole reentered to introduce the first speaker of the day: Sam Hayward.  Sam represents the likely combination of Maine restaurant owner, and seafood enthusiast. His TEDx talk, Taste and Place, where he told us why he believes “no state tastes like Maine.” The next speaker was Sara Curry, whose presentation, On the Mat to Recovery, explored the many miraculous benefits of using yoga as a rehabilitation method. As she left the stage, I was wondering if everyone else in the room wanted to sign up for a yoga class right then and there as badly as I did! To close up the first session of TEDx talks, we watched a TED video on a new, giant flower-shaped shade which might help us block the light from the sun from a satellite, allowing us to take much clearer pictures of outer space. It goes without saying that just this first block of presentations left us with plenty to think about.

The next part of the day was called in Impact Session. Three not-for-profit organizations made speeches about what they do, and how they’re looking for others to get involved. Next followed a twenty minute break, in which we were all encouraged to reach out to one of the representatives, and think about ways that we could help them in their journey. I chose to leave a business card of my contact info with one of the organizations that I thought had potential to make a real difference. All around the room, I saw others

reaching out as well. This was the first of a few breaks in presentations we’d have throughout the day. The breaks were the perfect time to meet other people in the community, and share our thoughts and experiences.

The second session of presentations opened with another video: a TED talk by Frans Lanting about using nature photography to promote compassion for and conservation of the animal kingdom which, as a zoology major, I was totally enamored by. Nicole kept us running smoothly along, bringing up Dr. Sandra Rehan, a professor here at UNH (Go Wildcats!). Dr. Rehan talked about the lives of the bees in and around the New Hampshire area in her presentation, The Secret Lives of Native Bees. Martha Stone stepped up next. She is the Executive Director of a New Hampshire homeless shelter called Cross Roads House. She told stories, in You’re Homeless…Now What?, of people and families who spent time in the House, and explained the reality and challenges of homelessness in our own community. The result was a TEDx talk that was both inspiring and humbling. The last TEDx talk before lunch was from Meredith Bennett, whose impressive resume includes her role as Co-Exec Producer of The Colbert Report! Bennett talked about the unique experiences she had working on the show; the theme and title of her presentation was The Power of Yes! Listening to Meredith reminded us all that any great adventure begins with a “yes”. If you’re wondering if I took this message to heart, I’ll tell you I still have the YES button I got from the event pinned to my favorite jacket.

Lunch was a great time to enjoy the excellent food, and share some thoughts with others on the events of the day so far. However, I’m sure I wasn’t the only person there who mostly felt eager to get back in the presentation room! The performance that followed lunch was one of my favorite parts of TEDx Piscataqua River. The performance was a collaboration between Neoteric Dance Collaborative and 7 Stages Shakespeare Company called Animating Shakespeare: Seven Ages. The performers onstage paired Shakespearean monologues with a variety of styles of movement, creating a theatrical experience infused with eerie elegance, and focused meaning.

Next, as the program said, TJ Evarts, the CEO of Inventioneers, Etc., LLC, took the stage. What I didn’t expect, though, was for him to be 19 years old! In his talk, The Kidpreneuers are coming, he told us about his experience with being homeschooled, and how that led him to starting his career as an inventor when he was only 11 years old!

He is now working on bringing his invention, SMARTwheel, to the market, but what I found even more impressive was how passionate, driven, and well-spoken he was in front of a crowd of people. Following TJ was another video called Teach Teachers How to Create Magic, a recording of an inspiring TED talk by Christopher Emdin.

The next speaker of the day was another one of my favorites, Matthew Loper. He spoke, in Youth Harnessing Religion for Peace (and How They Helped Me Heal), about his experiences with Kids4Peace, a program that brings together kids from all different religious backgrounds to promote peace and understanding in the next generation. The stories that he told about young people learning to respect and love the differences in each other were truly inspiring. The last speaker of this block was Von Diaz, who spoke about how her Puerto Rican heritage and southern upbringing can both be detected in the food she loves to cook. Her talk, Every Dish Has a Story: Mapping My Food History, introduced the idea that our favorite foods are a part of our cultural identities. This led right into the next break, during which we got to try a few of the foods she talked about!

After this break, Ellyn Touchette was the next to take the stage. Ellyn is the winner of the 2015 USM student poetry contest, and she performed her thought-provoking poem Phenotypes of a Real Woman. Reagan Ruedig gave the next presentation, called Memory of Style: Falling In and Out of Love with Our Buildings, which I thought was one of the most informative of the day. She talked about historical buildings and homes, and what, of our present-day architecture, will be worth preserving. I had never thought before about how anything we build today will either be torn down or regarded as a historical site tomorrow, let alone what would make the difference. The last TEDx talk at Piscataqua River was How to Get a Book Deal, given by Aimee Molloy, author of However Long the Night. The audience got a taste of what it can take to become an author, and learned that opportunity can come knocking when you least expect it. It was a very motivating note to end the day on! After the last of all the presentations, our host led us through a brief reflection of all that we had learned about in just one day. We said our Thank You’s to those who made this event possible, and as we left, the energy of the crowd was still as tangible as it had been that morning. Walking out of 3S Artspace, I could be certain that we all felt equally grateful to have been a part of TEDx Piscataqua River.

You can check out these TEDx talks too – just click the title! Let us know what you think in the comments, and follow @UNHStudents for coverage of more events like this!