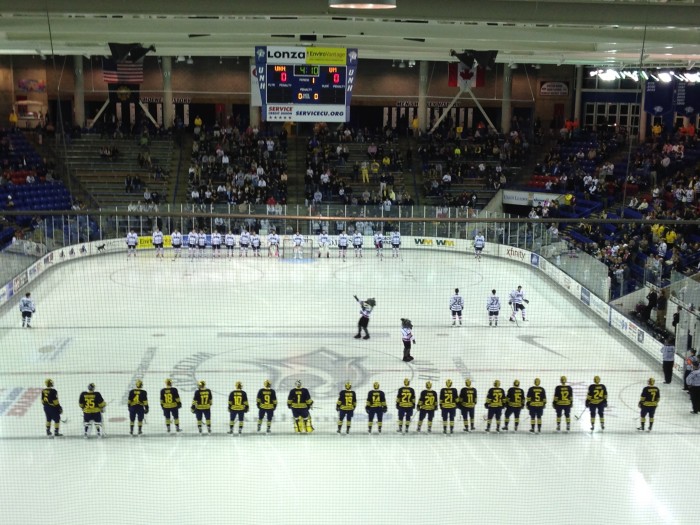 Now I can’t speak for how Friday night went seeing as I wasn’t there but the energy in the arena on Saturday night was intense. Fans, following the 1-1 tie on Friday night, wanted a win. Badly. I was sitting third row up from the ice in the student section and I can say that students were excited, tense, and at points in nearly a frenzy. They, maybe more than the team, did not want another tie. They wanted a win and would scream and jump around until the final buzzer if need be.

The night started off as any other hockey night at the Whitt. The arena started to fill up around 6pm, with people who had already picked their seats there much earlier. As the clock ticked down until the puck drop, the excitement started to build even more. The players took the ice for their pre-game practice, our Wildcats donned pink practice jerseys in support of the “Real Wildcats Wear Pink” campaign going on this past weekend. Cheers and the automatic standing for the team happened with booing and “sieve” chanting as Michigan came out. Having to explain this tradition, along with many of UNH’s sometimes “inappropriate” chants, to some newbies made the night even more entertaining for myself and the group I attended with.

Following Wild E. Cat, Gnarlz, the UNH flag, and the national anthem, the puck dropped and the excitement of the crowd hit another high.

Students passing Gnarlz & Wild E. Cat up to the top of the student section. The standard cheers of “U-N-H” and “I BELIEVE IN UNH” while linking arms and jumping up and down with your fellow Wildcats got the crowd pumped as the game began. UNH scored first and everyone from the student section & beyond jumped up from their seats to praise Kevin Goumas, who scored the first goal. #GoWildcats tweets started pouring in, gaining UNH even more points for the off-the-ice social media battle.

Although at a tie, the crowd was ecstatic although maybe a little weary of any chance at winning with Michigan scoring just moments after us. The building tension in the arena was cut back a little as the post period one contest took place which involved using a sling shot to send two students across the rink and into some oversized bowling pins.

Period 2 began with Michigan scoring, causing an avalanche of UNH chants and insults to be thrown at the Wolverines. Casey DeSmith, occasionally referred to at the UNH goalie god, made several amazing saves as Michigan tried to score again. UNH answered their second point before the end of the second period, creating a feeling that the Wildcats could possibly take home a win against fifth ranked Michigan. At the end of the second, we were tied… again. But, all of Hockey East was looking fantastic with scores either ahead of or tied with the Big 10 teams they were playing. One student was heard saying, “This is the only weekend ever that I hope Maine wins.”

Period 3, which seemed to be the most entertaining period along with the one where our Wildcats seemed to put in the most energy, included Wild E. Cat mooning Michigan fans and the Michigan goalie, a Wildcat, and Wolverine slamming into each other and taking out the net. DeSmith made another set of incredible goals and the third period left the teams still tied at 2-2.

Knowing that overtime was coming, again, Wildcats fans throughout the arena felt that we could at least keep the tie. As the five minute overtime ticked away, fans turned into a frenzy like state as Michigan attempted to score over and over. The arena became extremely tense as the Wolverines appeared to get the puck in the net but missed. A big sigh of relief went through the stands. More tweets went into the #UMichvsUNH tag, with UNH gaining more points as fan cheered the Wildcats on in the arena and on the web.

In a huge upset, the weekend ended in a 3-2 loss in overtime for the Wildcats. Not even the buzzer sounded as Michigan scored. And the stands, with the exception of the twenty or so Michigan fans, we silent and fans simply got up and left the arena. It was obvious no one was expecting to lose.

With the weekend at a close, the UNH Wildcats had a tie and loss added to this season’s record. But the Wildcats did get a win. UNH showed the most team spirit and support in the social media battle, having more than double the mentions of #GoWildcats to Michigan’s #GoBlue. Although some may argue that this win is not the same as a win on the ice, a win is a win. And we showed Michigan that in Wildcat country, no one has more spirit than our students, alumni, and community.

The final tally of wins from the weekend’s challenge.

And although UNH  may not have beat their Big 10 opponent, Hockey East swept the weekend with nine wins overall.