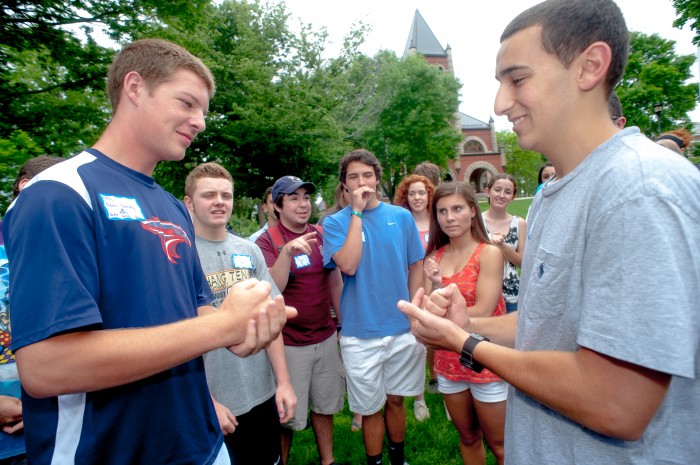 This blog post might seem slightly out of place for the moment. Freshmen admission letters are just starting to go out and there has been a fairly decent amount going on around campus—a lecture on The Butler, snow days, and Willy Wonka night at Philly! But there is a lot to say to incoming Freshmen, and really not that much time to say it. And one of the goals of UNH Tales is to give a look about what life on the UNH campus is like. Well, orientation is every Wildcat’s first experience of life on campus. Those two days in June give a glimpse at what the next four years will be. So, over the next twelve weeks we have left of school, I’ll be periodically posting instalments of this Freshman guide. So, here’s part one:

As the days until the Class of 2018 arrive on campus shrink down (there are sixteen weeks until June Freshman Orientation!), I

can’t help but recall my own welcoming to the University of New Hampshire and my first year here. I knew no one when I started here. I was coming from a small high school in Connecticut; I had no family who had gone here in the past so I was completely unfamiliar with the campus and all UNH traditions; and all of my expectations were based on a few campus visits and pamphlets I had received in the mail. Lets just say I was doomed to the cursed life of a confused Freshman. But you don’t have to have that fate. One of the main jobs of UNH Tales, along with the UNHStudents accounts, is to keep an account of campus life and to help prospective and incoming students know what goes on in Wildcat Country. So, here for you now, is a guide to everything you need to know as a Freshman coming into UNH.

Be prepared for some gross weather. A majority of students who I have talked to all say that it was either super-hot and humid or rainy and generally unpleasant. And then on top of that you’re staying (if you’re doing the overnight orientation) in Stoke Hall. If you don’t know someone who goes to UNH currently or has in recent years, you don’t know why that is a kinda sorta bad thing. And I’m not going to tell you why that is. What Stoke is should be discovered on your own. While most students dread the day where they just might end up living there, there are just as many students who love living in the eight story residence hall. Anyways, back to orientation.

I’ll focus a bit more on the overnight since that is what I did…. All those years ago.

When you arrive, there will be a bunch of college kids yelling at you, ripping you away from your parents (if they brought you), and sending you in a vague direction to check in to orientation. Once you’ve checked in, you get your group and orientation room/ roommate assignment and then the beginning of your college life begins. Over the course of orientation, you will meet with an academic advisor to decide on your fall class; get your ID picture taken (so look your best!), learn about university resources, and meet your new classmates.

It can all be a little overwhelming with getting to know campus and ice breakers and everything that goes on. But there is plenty of down time and chances to just take everything in.

The fall semester kicks off with a weekend that’s all about Freshmen. Before those days, there are a few pre-Wildcat Days programs to choose from: PAWs, Proves, and CONNECT. No matter if you do those programs or not, the Saturday through Monday before classes is all about you—the class of 2018. With the few exceptions, the campus is only Freshmen and this is the chance for you to roam free without a guide and without your parents.

During Wildcat Days, you get the biggest welcome the university can offer. The weekend includes a picnic and your class picture

(that will be hung in the MUB), WildACTS, a pep rally, Juke Box, and the college meetings.

These are some of the best days of the semester. You start making friends and making the campus yours. And just think, this is the last time (probably) that you’ll be able to say “I’m bored” since classes start that Tuesday (eeek!)!!!

Before I close out this first section of my Freshmen Guide to UNH, let me just give you a few terms that you’ll need to know for your orientations.

MUB– Memorial Union Building. This is the UNH Student Union building. Inside you’ll find the UNH bookstore, the movie theater, Union Court, the information desk, the game room, the entertainment center, and much much more! It is a great place to just hang out. Plus, the move theater there gets all the hit movies before they go to DVD and you only pay like $3! (And they take Cat’s Cache!) Also, the MUB is attached to HoCo and the Dunkin Donuts

Stillings– This is one of the three dining halls on campus and where your ID pictue is taken. It is also, arguably, the best dining hall on campus.

Stoke Hall– This is the hall that houses you during June orientation. The eight story residence hall houses 611 students along with business services, financial aid, and the registrar’s offices.

CONNECT– One of the pre-orientation options for freshmen.