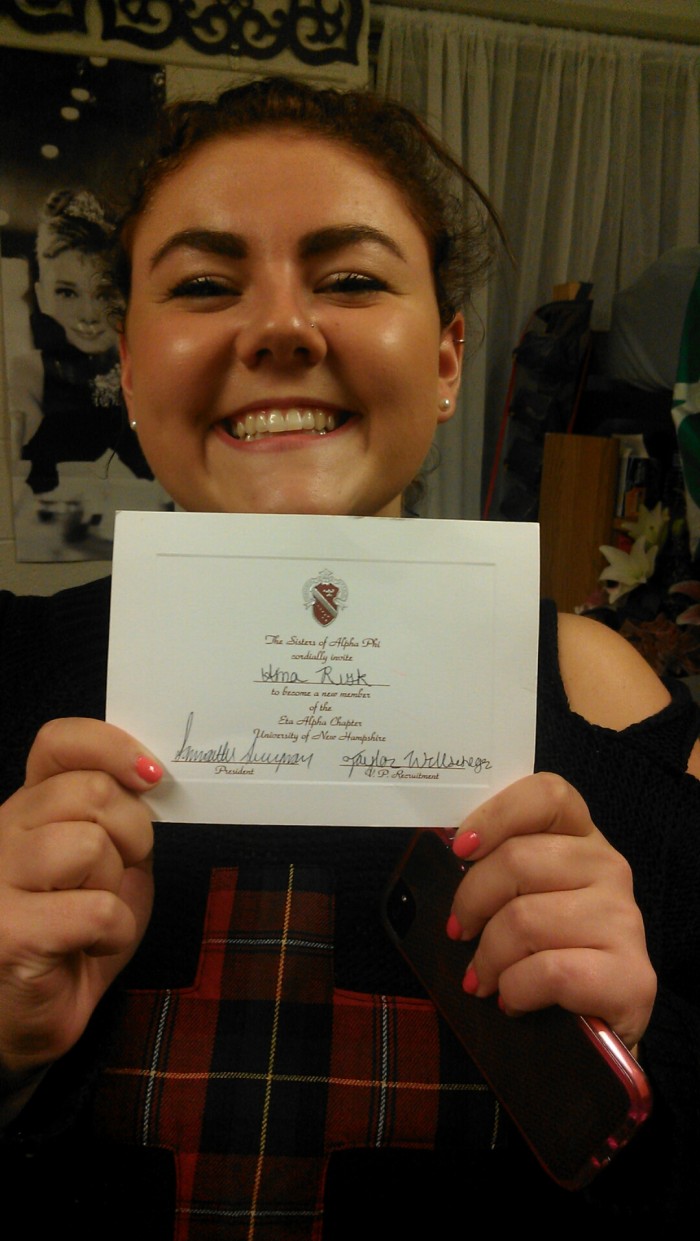 Like most people I’ve met in college, you’re either pro-Greek life or anti-Greek life. Pro-Greek life meaning that you support the idea and/or want to join (or are all ready apart of) a sorority or fraternity. Most people anti-Greek have an image in their heads of a group of crazy, mean ‘brothers’ or ‘sisters’ that only wish to haze and humiliate you. I believe to some extent, I too was deterred from Greek life because of this stereotype. It was until UNH rush week came around that changed mind.

It all started in my Italian class when my friend asked if I’d be rushing for a sorority this week,and I quickly replied no. But then I thought about it: ‘why not rush?’ That night I sat in my room researching the available sororities, wondering what they were all about. I had never really considered joining a sorority, I suppose the stereotype was always a bunch of super preppy girls shopping at Ralph Lauren. I, on the other hand, felt I didn’t very well identify much with the crowd. When rush week started and girls left their dorms to participate, I watched girls of all different styles and personalities go out.

This got me thinking even more: maybe I could rush and if I was accepted then it would help make more friends, it does look fun, and the philanthropy aspect does look like good karma. I ended up not rushing that week out of nerves and indecisiveness, but on the last night when my friend returned home with her acceptance gift to join Alpha Phi, we were ecstatic. She was so happy to now be able to pledge into the sorority and become a sister, she said that the girls at the sorority were so nice and how they all had a great time laughing and talking. She held up her little hand-made plaque stating that the sisters at the sorority would like her to pledge. She was gleaming, erecting it on her desk so she could look at it more. My indecisiveness settled and I realized I’d made a great mistake: I should have rushed. My father had been in a fraternity, Tau Epsilon Phi at Syracuse University, and since his four-year run in the frat, no one else in my family had really continued the Greek life. Continuing what might be a Greek-life legacy and seeing how much fun the sororities seemed to really be, including how different all the girls really were made me change my mind instantly.

There might be a lot of stereotypes surrounding the ideas of Greek life but I personally cannot wait to rush next semester or later my Sophomore year. I would encourage any incoming freshman to seriously consider rushing a fraternity or sorority before its too late; fraternities and sororities also hold informational sessions so you can go find and out what they’re all about, something I should have done! So participate in the offered activities to see what they’re all about. If your gut says Greek, then do it!