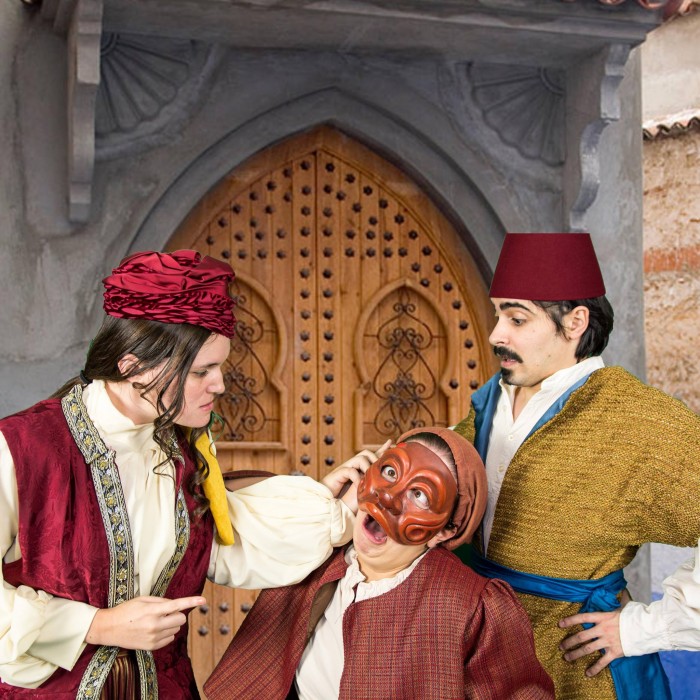 The Comedy of Errors

UNH’s production of The Comedy of Errors opened on October 8th at 7:00 in the Johnson Theater!  I had the pleasure of attending this comedy, in which two boys are separated from their respective twin brothers at a young age. When both pairs wind up in the same city, everyone’s identities are mistaken and the confusing Shakespearean hi-jinx ensues!

Left to Right: Skoniecki as Adriana, Henrick as Dromio of Ephesus, and Lavimoniere as Antipholus of Ephesus

The Antipholus twins were played by Benjamin Bertrand and Michael Lavimoniere, and the Dromio twins were played by Kristen Henrick and Olivia Fiore. The prior two, along with Adriana, played by Tori Skoniecki, and Luciana, played by Natalie Bujeaud, took every character objective to the highest of stakes, while still convincing the audience of their genuine investment. The two Dromios took turns bringing hysterical physical comedy to every scene. Fiore’s vocal range and exceptional comedic timing left me in peels of laughter, and the audience’s excitement was tangible every time she stepped onstage.

Bertrand as Antipholus of Syracuse, looks on during one of the hysterical monologues by Fiore as Dromio of Syracuse
Photo by Jasmin Hunter Photography

This show was the first at UNH to be directed by Aimee Blesing, a theater professor specializing in Voice and Acting technique. She gave the show new life by infusing a “commedia d’elle arte and restoration” style into the music, set, costumes, and blocking. Despite the minimalist set, there is always plenty to look at on stage, thanks to the ensemble’s creative use of background space. Blesing also implements an inventive approach to the creation of on-stage sound effects that felt like an inside joke between the cast and audience. The masks worn by the actors help to sustain the sense of altered reality that allows the audience to eagerly accept the ridiculous world of the very real characters. All of these choices made for an incredibly original and entertaining show! If you get the chance to attend one of the three remaining shows, I highly recommend it!

Will you be attending this show this Homecoming 2014?