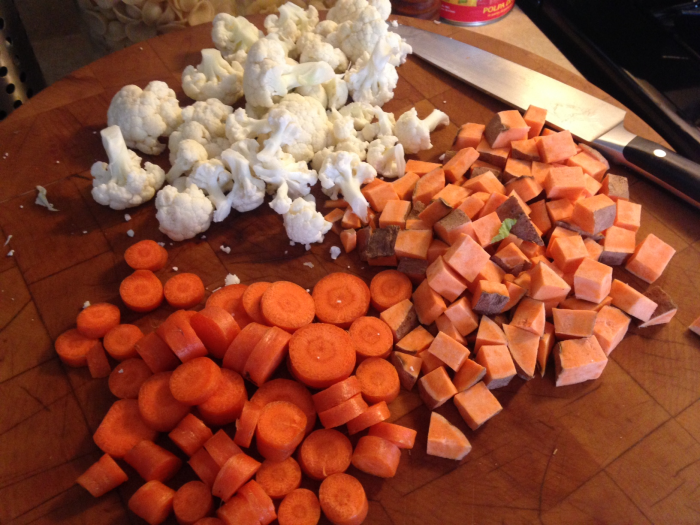 When it comes to vegetables, are you like me: just not that into them? Not that there’s anything wrong with them–they’re nice, and they seem healthy and attractive and I can totally imagine somebody else having a super huge crush on them. But they are not the stuff my dreams are made of. Because they’re not ice cream, obviously, which is literally what my dreams are made of. I get very cold at night.

But I will admit, sometimes vegetables look a lot better than other times, and I almost think I could fall for them. When they’re looking crispy, with maybe just a bit of caramelization? Then I start to think, not bad, vegetables, not bad.

I’m talking, of course, about when vegetables are roasted. Which to my mind is the best possible way to have them. There are some vegetables that, when roasted, I might have an honest-to-goodness crush on. I like a roasted Brussels Sprouts, and roasted carrots, and I would definitely take a thin-sliced roasted beet out to dinner. Or maybe I wouldn’t, because what if I wanted to order something with beets in it? Things’d get real weird real fast.

Uh, anyway. This week, we’re going to take a look at how you roast vegetables. There are a lot of good reasons to include roasted vegetables in your meal: they’re good for you, they make a great side for pretty much anything, and we live in New England where there are lots of delicious vegetables that didn’t have to travel across the country to get to you. But also, I think roasting is objectively the best way to cook a vegetable. Lots and lots of scientific evidence supports that claim, probably. Maybe.

What Do I Need?

…but otherwise, this edition of The Basics is a little different. You’re going to need vegetables, obviously—probably the kind you don’t hate. But the nice thing about roasting vegetables is that you can make all sorts of interesting combinations. Rather than memorize a separate procedure for each, it’s better to just remember these three categories:

Sturdiness
This has to do with how much time in the oven it’ll need. Root vegetables like potatoes, carrots, and turnips are a lot of vegetable, and they need more time. Some squash, like butternut and acorn, are not root vegetables, but they’re pretty heavy. Maybe the best test for this is to imagine dropping one of these on your roommate’s bare foot. The more you imagine it’d hurt, the sturdier the vegetable is. HEY! I said imagine doing it!

How Small Are the Pieces?
Before you roast your vegetables, you’ll want to cut them up. The smaller the pieces you cut them into, the faster everything will roast. Maybe the best test for this is to imagine throwing one of the pieces you’ve cut at your roommate’s forehead. The more annoyed he is, the longer it’ll take to—okay, this joke’s gone too far.

Is It in Season?
There are lots of great reasons to eat vegetables that are in season. High on that list is the obvious THEY TASTE WAY BETTER. Also high on the list is that it’s probably not great for the future of the planet to eat things that have to be shipped from 3,000 miles away. If the prospect of worrying about whether or not all your vegetables are in season seems overwhelming, let me just suggest you take it one at a time. It’s not the end of the world (well, maybe it is, but thinking about that will def make you panic) if you take a little time to become really acquainted with the foods you like.

The reason I introduce these categories is so that you can think about any mix of vegetables you might want to work with. Here, I’m going to cauliflower, carrots, and a sweet potato:

Naturally, the sweet potato would hurt the most if you dropped it on your roommate’s bare foot. This means it’s going to take a little longer to cook. But also, if you imagine a carrot as thick as a sweet potato, you can appreciate how that’d be equally unpleasant for said roommate. (Carrots and sweet potatoes are both root vegetables, which are generally dense and take a while to cook.) Cauliflower, on the other hand, wouldn’t be quite so painful, so I’ll plan to add that after the carrots and sweet potato have cooked a while.

First, you’re going to chop them into whatever size you want. Remember, the smaller the pieces are, the faster they’ll cook. It also means they’ll burn faster, so if you’re not a fan of crunchy vegetables, leave the pieces bigger. Most importantly, remember that the outside always cooks faster than the inside. So, if you cut huge pieces, you’re risking the outside getting crispy while the inside remains raw.

Important Tangent
Now, obviously, the most important takeaway from all this is, if you want to make homemade chips, you cut your vegetables into razor-thin slices. You can do this with potatoes and sweet potatoes obviously—but also with (and you should totally try this) beets. Do not throw a beet chip at your roommate. He’ll just eat it and be grateful. No fun at all.

Second, once you’ve them cut, toss them generously with olive oil (you can do this right on the baking sheet) and a little salt. Pepper is probably best added at the end.

Third, it’s time to make some decisions about seasoning. Another nice thing about vegetables is that you can season them with pretty much any herb or spice you want. My favorite combinations are:

Red pepper flakes are always a good idea too.

Advanced technique: don’t add all the seasoning at once. Instead, “layer” it in by adding some of it each time you stir (see below). This will create different and interesting flavors.

Rather than say how long you should leave the vegetables in the oven for, I’m going to recommend the following three-step process:

How Do I Know When They’re Done?
You can expect them to take around 40 minutes (depending on how much you’re cooking and how large the pieces are). But the real way you know that roasted vegetables are done is, you taste one. If it’s delicious–or, depending on your attitude about vegetables, if somebody else who likes vegetables would think it’s delicious–it’s ready! Put ’em in a bowl and serve next to pretty much anything.