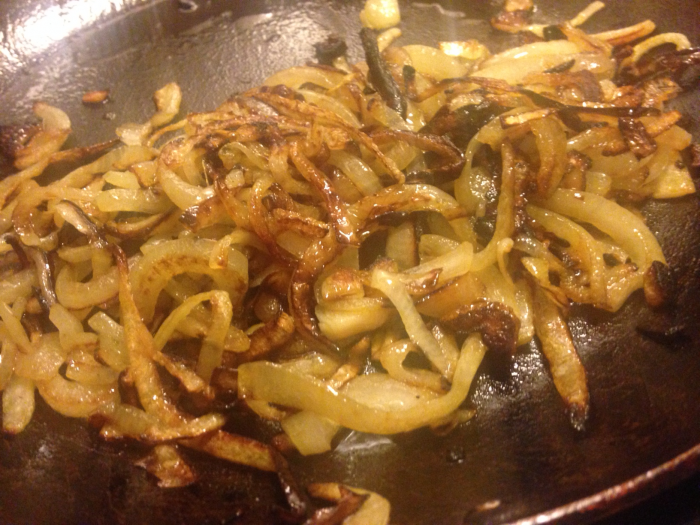 The thing about caramelized onions is, they’re way fancier than they actually are.

…don’t read that last sentence too many times or your hair will stand straight up. But really, caramelized onions are delicious and sweet, and when you say that you added them to some dish—and you can add them to almost anything savory—people get impressed. Seriously, this is a good food to have in your repertoire.

What Kind of Onion?

You can use pretty much any kind of onion. Most people default to yellow, but it’s fine to use white or red—though the red ones kind of look boogery when they’re done.

One of the reasons caramelized onions are fancier than they are is that they don’t require much prep work: all you need to do is chop the onion.

If you’ve never chopped an onion, start by peeling it:

If you want to be efficient, you probably would’ve chopped off the ends first, which here I either failed to remember to do or thought would be a valuable learning experience for readers (let’s go with the latter):

Now it’s time to make the first of our TWO MAJOR DECISIONS! That is, what shape do we want our caramelized onions to be? I went with strips, because I like a noodlely caramelized onion experience:

…but you could chop them smaller if you want to be able to disperse them more thoroughly throughout whatever you’re going to add them to.

Something to keep in mind is, if you mince the onion—that is, chopping it into tiny bits—you may very well end up with a kind of caramelized onion jelly.  This is not necessarily a bad thing: you could then blend that with sour cream and create a delicious onion dip, and then you could eat that WITH A SPOON. Er, okay, with chips. Don’t eat sour cream with a spoon, it makes your heart frown.

About the crying: as you probably already know, chopping onions makes your eyes water. This is because when you chop an onion, it releases chemicals that mix with your tears and forms an acid in your eye.  You can decide if this is because of God or chemistry or both, but whatever the case, it is Working As Intended. Probably you should change careers and dedicate your life to making an onion that doesn’t make us cry. But in the meanwhile, just be careful not to cut yourself.

Time to Burn Some Onions

Another reason that caramelized onions are fancier than they are is that they’re just burned vegetables. That’s right: the goal today is to intentionally burn something. Should be fun. To begin, heat some olive oil in a frying pan over medium heat:

Give it a minute or two to warm up, and then throw your onions in.

They’ll sizzle and smell good and stuff. Make sure you stir them around a little. After a few minutes, they’ll begin to “sweat,” which sounds like a rude thing for a vegetable to do, but nevertheless:

Unlike most people, a sweating onion smells fantastic.

We next have to answer the SECOND OF OUR TWO MAJOR DECISIONS: when are the onions done? At this point, the process of caramelizing an onion gets very introspective. We’re about to learn some things about ourselves: are we worriers? Do we need to micromanage everything? Can we be patient? Does waiting make us anxious? Seriously, these are the kinds of things you’ll learn about yourself as your onion caramelizes.

Caramelized onions are just like that scene in Braveheart:

The best way to learn this process is to do it yourself a bunch of times. (Try not to burn yourself.) As with pretty much everything you cook, you should taste frequently: the best way to know they’re done is to taste them and think, that’s delicious, I’d definitely eat that. Still, here are two starter guidelines:

Allow for 20-25 minutes for one onion to caramelize. If you want to leave yourself some room for error, keep the heat lower. The process will take longer, but you’ll be less likely to overcook them.

…and Then What Do I Do with Them?

Add them to pretty much any savory dish to make it fancy. For example, I like putting them on burgers:

…but you can add them to rice, pasta, lentils, eggs, or any number of things. They’re basically a “certificate of fanciness” for any meal.

Also, You Can Just Cheat

A lot of chefs will turn up their noses at this version of “caramelized onions”—because we’re not actually caramelizing anything—but you can achieve a similar flavor in much less time by following the following:

If you want to learn more about cooking, read NOURISH Nutrition Peer Education’s column every Friday in The New Hampshire.