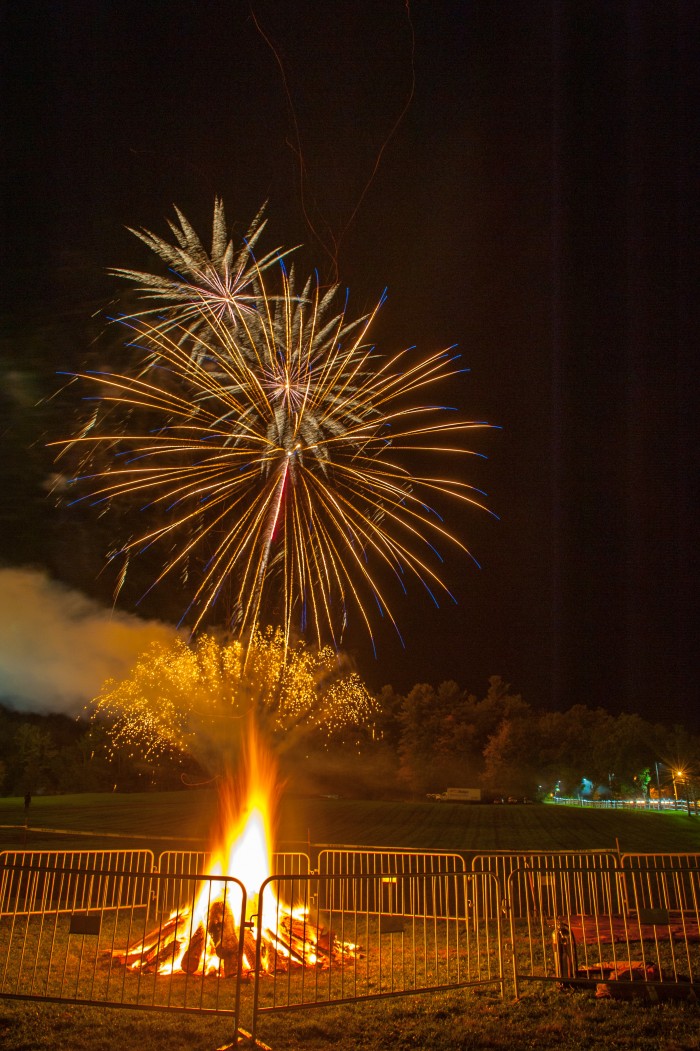 This past weekend was Homecoming (woo!) and it was my birthday (double woo!) which was pretty cool. My birthday has fallen on homecoming two years in a row and last year, when I was a freshman, I just went home. I wanted to spend my 18th birthday with my family instead of on campus. And on top of the birthday I just missed home and figured I wouldn’t miss much… I’m more than happy I didn’t miss homecoming this year in favor of blowing out birthday candles at home!

First of all, how cool was the Harry Potter theme? CAB, at least in my opinion, did a great job at bringing in as much of the wizardry world to campus as possible. Between the floats in the parade, the “Hungarian Horntail” bonfire, and wizard rock in the field we might as well have been at Hogwarts! (So cheers to you, CAB!)

To start homecoming on Friday, I helped to paint the Fairchild Hall parade banner most of the night. The painting stopped at midnight though as some of my fellow fairchildren sang “Happy Birthday” to me before getting back to painting. After about four or five hours of hand drawing, careful painting, and putting in some excruciating details, the banner was done and we all headed off to bed. That day was the pretty awesome parade (although I do have to ask where President Huddleston was on his motorcycle that everyone kept telling me about!). All of the floats were AMAZING, even the ones that didn’t go with the theme and were just there… like the LL Bean boot. And the banners were just as awesome, although I do have some bias towards my hall, thinking that it was definitely the best. As the parade made its way up Quad Way and snaked down to Handler Hall, not only did it become clear that Homecoming was going to be extremely fun but having a parade on your birthday is pretty sweet (sorry for the personal notes but I swear it’s worth it!).

As candy rained down on the UNH Social team and other spectators who were camped out at Handler Hall, I can say that we got quite a

show. Being at the end, we got to see all of the performances from Sisters in Step, the marching band, and just the weird little things that were a part of all of the floats and banners. Did anyone else see the little, or rather toddler sized, snitch go running by with Williamson and Christensen? Little things like that made the parade even more magical for those lining the streets. You just don’t expect college students to be that creative sometimes! And, for me because I have awesome dorm-mates, the parade was even more special because I got “Happy Birthday” sung to me as Fairchild marched on by. As the parade wound down, floats were replaced with the special service buses to the field were the picnic, music, bonfire, and fireworks were too take place.

At the field, a lucky thousand students were able to get the official Homecoming 2013 shirt which featured the Hogwarts crest with “UNH” in the middle and the wildcat above it. Aside from Hogwarts themed shirts, the field was transformed into some mix of Hogsmeade and the Quiddich World Cup (watch Harry Potter and the Goblet of Fire if you don’t know what I’m talking about). There was an actual Quiddich pitch along with game that took place around 5:30. Some great UNH acts took the stage until the Hungarian Horntail Bonfire started. Dumbledore’s Army, Improv Anonymous, and Sisters in Step were among some of the acts to entertaining the hungry crowds of students and alumni.

The following day was tailgating and the football game. Both were packed all day long and followed by cheering students when the Wildcats won 59-19.

Having all of this going on while I was celebrating my birthday took nothing away from any of the fun of either event. Honestly, mixing the two made them both better!

Newer PostTwas' the Night Before Homecoming: Part 2
Older PostHalloween on a Budget