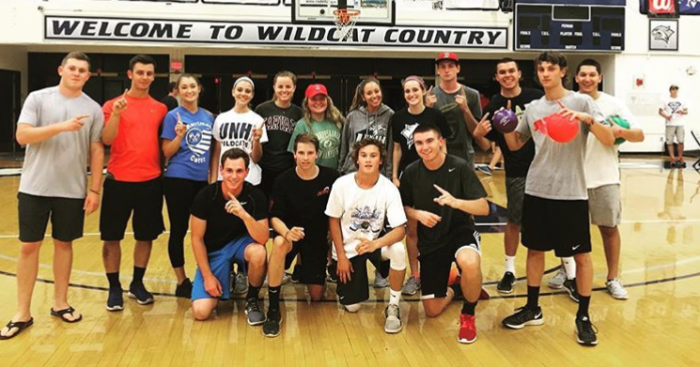 I was first told about the FIRE Program at freshman orientation; but I was never told about how big of an impact it would have on my first semester of college. I expected the FIRE Program to just be a class that I went to once a week to talk about freshman year. It turned out to be much more than that.

ne of the aspects of FIRE is your team. Every first-year Paul College student is placed on a FIRE team and I was fortunate enough to be placed on team thirteen, also known as F1R3 Goodell. We are a team of twenty-two students who are all united around our leader, Kevin Johnson (KJ). KJ told us on day one that this program is what you make of it and that he was going to help us realize that along the way. Personally I believe he has done more than that. KJ has opened our eyes, and my eyes especially, to what there is to do around this campus. He has pushed us since our first class to get out of our rooms and go to events. He wants to see us benefit from the different activities around campus.

I have always enjoyed watching sports since I was a little kid. I knew that wherever I decided to go to college, that the sport aspect of the school was big. I knew I was going to go to the sporting events, but I thought that would be it. The FIRE competition between teams has pushed me to branch out and try going to different kinds of events that I wouldn’t have normally gone to. KJ is always inviting us to go to events when he goes because he wants to see us try new things. One event he invited us to is a performance by Improv Anonymous. For starters, I didn’t even know improv existed on campus. On top of that, I didn’t know I would enjoy it. I’ve gone to their performances the past two weeks

with members of my team and we plan on going as much as we can.

Everyone has a different experience with this program. I truly believe that if I was on a different team, or not on a team at all, my first semester would be drastically different. Having similar schedules with members of my team has allowed myself, as well as others, to build friendships with one another. If the FIRE Program wasn’t available for me, I believe I wouldn’t have been this successful through the first semester. This program has provided me with friendships that have introduced me to even more people across campus. I have had multiple non-Paul college students tell me how much they wish they had the FIRE Program when adjusting to college life. I feel very lucky to have had the opportunity to be a part of this program. I am proud to be a member of team F1R3 Goodell!