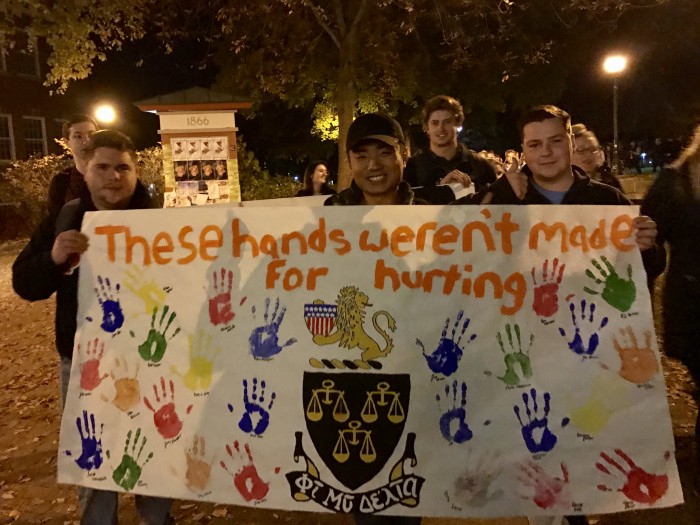 I hope everyone is having a great semester! It’s hard to believe it is almost over. SHARPP has had a busy but successful semester with all of our events. The event I want to reflect on today is Take Back the Night. Take Back the Night marches first started in the ’70s in response to violent crimes against women. It focused on ending sexual, relationship and domestic violence in all forms.

Andrea Dworkin discusses the underlying concept of Take Back the Night in her book “The Night and Danger.” She writes, “Women are often told to be extra careful and take precautions when going out at night. In some parts of the world, even today, women are not allowed out at night. So when women struggle for freedom, we must start at the beginning by fighting for freedom of movement, which we have not had and do not now have. We must recognize that freedom of movement is a precondition for anything else. It comes before freedom of speech in importance because without it freedom of speech cannot in fact exist.”

Community educators and advocates recently held a Take Back the Night event here on campus. We all gathered at T-Hall on Wednesday night and from there began our march to protest street harassment, sexual assault, gender-based violence, victim-blaming and rape culture. I wasn’t sure what to expect, but I was overwhelmed by the amount of people who participated. More than 150 students and staff marched to show their dedication to ending sexual violence on our campus. Following the march, we held a candlelight vigil where we invited survivors, friends and allies to come forward and share their thoughts and stories. I, again, was overwhelmed by the bravery and courage of the survivors who shared their stories. I felt inspired knowing this event gave them the safe space they needed to speak out. I was also touched by the support everyone received. There were a lot of hugs and tears shared. But above all, there was support and care for one another.

I asked AmeriCorps member Ryan Grogan to share his thoughts about the event. He said Take Back the Night “allows for survivors to have a safe environment to share their stories.” To me this was the biggest success of the night. For survivors to feel safe and comfortable enough to share their stories shows the impact of friends and allies. Ryan continued, “It was an extremely powerful and moving visual to see that many people stand up to take back our streets and to support survivors.” I agree — I was hoping many people would attend, but to see the number who actually did really showed just how many people care about these issues. It made me realize how many people are impacted by these issues and the importance of using our voices create change.

I want everyone who participated in the march and vigil to know how thankful we are at SHARPP. It is the people who step up, speak out and stand with survivors who make a difference. Society silences these issues, but this event proved we will not accept this.  Because of the success of this event, I am hopeful that together we can make a change in sexual violence here at UNH.

As always, I want to remind everyone that SHARPP is here for you. We support you, we care about you and we will stand with you. Again, thank you to everyone who came and participated in Take Back the Night; the impact of this event is something I will never forget.