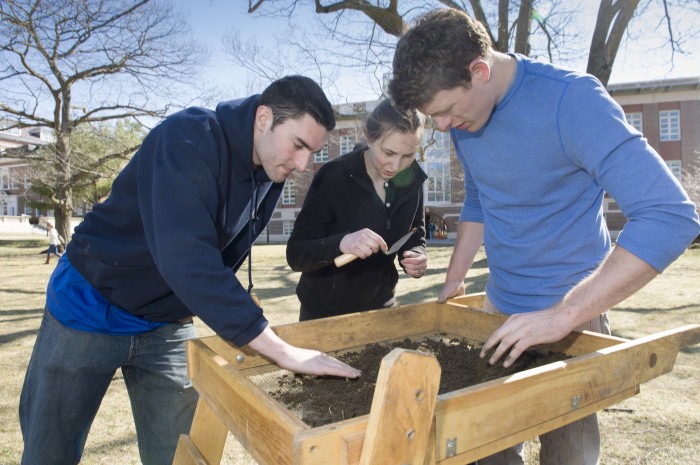 The Lost Campus: The Archeology of UNH

Like all towns around the country, Durham is full of culture and history. It can be easily researched through old archives of newspapers, personal journals and diaries, as well as just by simply talking to people. However, the history of a place, the material history, can be found just under a few layers of soil. ANTH 444 The Lost Campus: The Archeology of UNH, is just one of the ways that the material history of UNH and Durham are being uncovered.

Through this class, Meghan Howey, a professor of anthropology, teaches students the processes and practices of archeology. Students actually get to go out and do digs around campus. The most recent dig was conducted on T-Hall, right around where the new sidewalk was put in last year.

Students dug and searched in about a two square meter plot, and the artifacts they found in that small area would astound you. From hundreds of nails, some bent and distorted from extreme heat, to old wires, the students were able to learn a lot more about the history of the area than they would if they simply stayed within a classroom. Through old records, they learned that the train tracks used to run directly through what is now campus, right under DeMeritt Hall. They found some evidence of an old train building, lots of wood and nails, as well as evidence through soil stratification and compaction that showed exactly where the old tracks were laid.

Much of the wood they found was charred and burned, leading them to believe the building may have been purposefully burned to the ground.  Old town records show that there was a terrible derailing back in 1905, and many students of UNH (at the time it was known as the New Hampshire State College of Agriculture) helped free the trapped passengers.

The students of ANTH 444 also found a lot of slag, old melted metal that is a byproduct of welding, around the area, a wire from a weather station that was built on that location in the 60s, China and other ceramic pottery dating back to the early 1800s, and an old tobacco pipe. These findings show that perhaps after the derailing, the tracks were moved to their present day location, and that site was used for other purposes. The only way to know for sure is through more research, and perhaps more digging.

Without the help of this class and others like it, we wouldn’t know a lot of the history around campus, since this isn’t the only dig site that has been researched through the anthropology department. Even buried underneath many of the buildings we have standing today, old and new, there could be so much history lost to us. This leads us to the Heritage Plan, a project of Meghan Howey’s. To put it plainly, the Plan is to incorporate archaeological research and digs into new construction plans around campus. When UNH Facilities begins planning to put up a new building, renovate an existing one, or build a new sidewalk, the anthropology department, specifically faculty and students that work in archeology, will research the site and see if it may possibly hold artifacts beneath it or not. Once deemed as a “sensitive” area, students will go in and do a dig and see what they can find. After the site has been documented and thoroughly searched, construction can go on as planned.

The purpose for the Heritage Plan is to sustainably preserve the history of the area, and to uncover any hidden objects of cultural significance. The plan is in its first few months of its two-year pilot program, to determine how easy it is to do this research and if it is possible to be incorporated permanently into the university’s construction steps. There are many other schools across the nation with plans similar to this one, and they are being a great help to the fellows developing the background information needed to implement the plan. It would be a huge step in the right direction of sustainability for the university to go ahead and approve the Heritage Plan. Sustainability doesn’t just apply to being environmentally aware but works within all aspects of life.

By sustaining the cultural history of UNH and Durham, we are ensuring that for years to come people will know what happened here and what we as a people did here. We are able to further our influence, whether good or bad, on future generations if they can know how we lived and developed in the past. The work of Meghan Howey, her colleagues and her students are beneficial to us as a community and should be built up and praised.