It’s spring again (finally). Everyone is starting to think about their summer plans, graduation, or finals. The residence halls and their staff have just a little more they’d like us, the residents, to think about before the semester ends. The spring semester always brings the idea of social justice into the community. Socials are held by the hall staff to educate; Health Services and SHARPP will host talks, walks, and film screenings; and other organizations around campus may hold any number of events to help raise awareness to this broad topic. Last year, I had the pleasure of writing a blog about my experiences with social justice events on our campus (Dallas Buyers Club screening and Q&A, different awareness walks around campus) and at other schools (I attended Stone Hill College’s Lead4Justice conference). This year, with this blog, I hope to dive deeper into how UNH promotes awareness and educates its students, faculty, and staff on the many sides of social justice.

First, what is social justice? Social justice is defined as promoting a just society by challenging injustice and valuing diversity. This means speaking out when people are being devalued and discriminated against because of their race, sexual orientation, disability, financial or family background, or any other part of who they are. This year, much as they do every year, UNH is doing its part to help the community better understand social justice and how to be more involved.

Looking at my own dorm, Fairchild Hall is using the month of April (and the last part of March) to host socials that help the residents share their experiences and learn how to best react to instances of injustice.

To kick off this month of social justice, RA Aubrey Quintus (Class of 2016) hosted a social to go over what trigger words are and how to not be a bystander when they are used. Trigger words are words that cause an emotional response, painful memories, or some type of, usually, negative response. While there can be positive reactions to a trigger words, they are generally negative. To start the social, she had the group of about ten residents list off what they thought trigger words are. The words ranged from “basic” to “slut” and numerous words in between. This activity lead to some discomfort for several of the residents but helped to open up a discussion of why these words are triggering and why we have such a negative reaction to them. The group was then given a list of phrases and asked to pick one that they had the strongest reaction to. Then the residents were broken into groups based on which phrase they choose so that they could discuss. This lead to discussions on the negative and inappropriate uses of the words “homo” and “retard”. Two students shared why they found these terms extremely offensive based on personal experiences. Another discussion lead to talk about rape culture on campus and abroad. While most of the group understood why these words and phrases are triggering, some struggled with why these phrases were so offensive. This gave those participating a chance to educate and help a fellow Wildcat understand why the use of these words inappropriately is so wrong.

These discussions then lead to how to not be a bystander when you hear these trigger words being used around campus. While it was agreed that most of campus is great about not just frivolously using these words, you do occasionally hear phrases like “I like your shirt, no homo though.” Some tips shared by the group were to share why you think what they are saying is offensive. Do not just shut the person down though, this is a moment to educate them. Generally, phrases like these are not being used maliciously and the person talking may not be aware that what they are saying is offensive or triggering. If you are uncomfortable calling them out, try saying something like “people still say that?”. This makes them at least think about what they are actually saying.

race and gender on campus. In the first talk on April 2nd, residents came together to talk about race and diversity on campus. Taped to each coffee mug was a question for the group to discuss. Students were able to share their experiences and opinions about the diversity of UNH’s Durham campus. “I don’t get why some people think that UNH is a ‘diverse campus’. It is 95% white!” said one student during the hot topic discussion. This lead to wondering why campus is like this and what can be done to increase diversity on campus. Other students talked about the culture shock of coming to a school like University of New Hampshire after being a minority in their high schools. Residents then moved on to a discussion of racial stereotypes and how to combat them in our day to day lives.

The following week, a group of residents came together again, this time to discuss gender. The talk brought up the ideas of gender roles; the difference between sex and gender (if you aren’t sure what the difference is, check out this video!); how gender impacts our daily lives; and how to break gender norms. Much like in the discussion about race, the Fairchild residents had a lot to say on this hot topic. The talk tended to focus more on society as a whole’s view on gender and gender norms more than gender at UNH. Residents did bring the talk to campus though and discussed the implications of gender in simple acts of kindness, such as holding the door, and people handing out flyers/ tabling. The female students in the group were able to share their side of interaction like these while the males were able to share how they may be viewed around campus.

These talks opened up Fairchild Hall to be more open minded in its considerations of race and gender. These talks even went as far as to educate some of the residents which added value and moments of “practice what you preach.”

Another social held to help promote social justice around Fairchild was the Wheel of “Dumb Things Said by Well-Intended People.” People make mistakes, we all know that. Generally when we are talking to others we are not speaking to them cruelly or trying to offend them. Occasionally though, even the most well intended person may accidently offend a peer. With this wheel, some phrases were shared that on the surface seem fine but under examination end up being offensive. “Where are you from?” “We are all a part of the Human Race!” “I don’t see color.” These phrases and others were discussed by a group to determine what was wrong with them. Generally, they just seem inquisitive or inclusive—which is great! Each had its own problem though which the residents quickly determined and discussed. With the question of “where are you from?” it may sound like you are just curious of the person’s background or what town/state/country they are actually from. This question can single a person out and end up sounding ignorant. In the phrases about the Human Race and not seeing color, the person saying these phrases can seem as though they are erasing a part of someone’s culture and who they are. The group further discussed these phrases and others to help enlighten everyone.

Thursday, April 9: Stepping Out Against Violence at UNH

Talks and awareness on social justice issues isn’t just a topic to discuss in the dorms. This is an issue for all of campus to pay attention to. 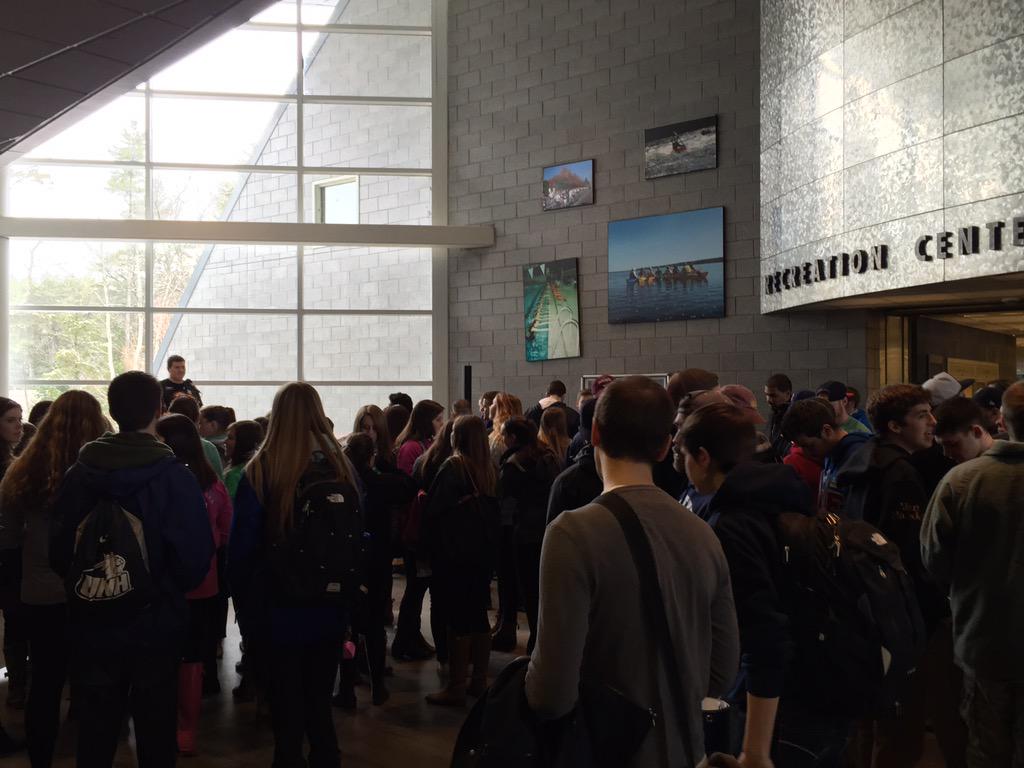 Students gather at the Whitt before starting the walk around campus.

SHARRP hosted the annual Stepping Out Against Violence Rally and Walk as a part of Sexual Assault Awareness Month. Dozens of student orgs, faculty members, and people from the Durham community stepped out to show their support and to raise awareness during this twenty minute walk around an unfortunately still snowy campus. This walk is also tied into the White Ribbon Campaign. This is another annual campaign that SHARPP does during April to try and get at least twenty five percent of the men on campus to pledge to “Never commit, condone, nor remain silent about violence against women.” (Sign the pledge here) The rally and walk were wrapped up with a lunch, “Hot Dogs, Hot Consent”, hosted by the brothers of Phi Mu Delta.

How do you get involved with social justice on campus? What are some issues that are important to you? Tell us at UNHStudents.