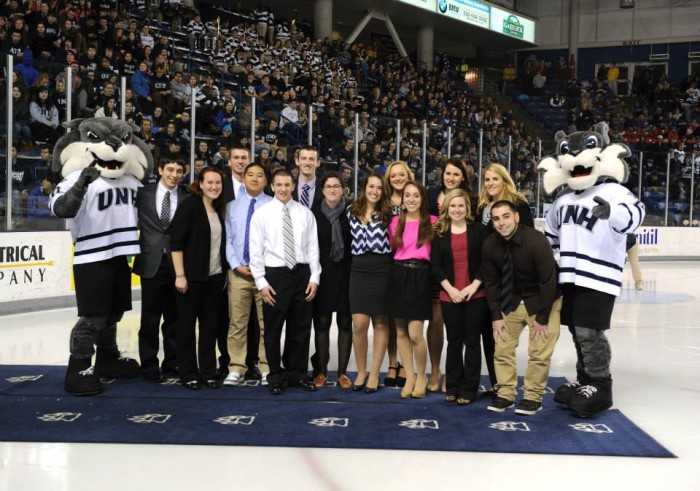 I had just moved back to Durham after a summer at home with my parents. I was living in Peterson Hall with my best friend and we were ready to conquer Sophomore year. I was coming off of a freshman year with the highest GPA of my life, a ton of friends and a great boyfriend, a double major in Business Administration and Communication, and an internship with UNH Athletics to look forward to. I spent as little time away from UNH during the summer as possible – I was an orientation leader living on campus well into June, and returned a week early in August to be on

PrOVES staff. I was living the Wildcat dream.

So why, then, did I spend my summer at home googling transfer requirements to other universities? Because of the Sophomore Slump.

Two weeks into the semester, I and a hundred or so of my fellow Paul sophomores took our seats in G75 for the first quiz of the year in Financial Accounting. I left feeling as though half of my brain might have still been in the classroom. I knew math wasn’t my strong suit, but when I went on Blackboard later and saw it – a D – my mind went into straight panic. The next day, I was sitting in the academic advising office with a drop form in hand and a change of major submitted. I, a chronic over thinker who gathers every fact and weighs every possibility before making a decision, had made the rash decision to change my major within hours of receiving my first less than ideal grade in a class.

The Sophomore Slump had taken me captive. I had no idea what I wanted to study, what I was going to do with my degree, or why UNH suddenly surrounded me with stress and uncertainty when it was my home away from home.

Fast forward to today. I was hired as the Sophomore Shadow Program Assistant in July. My job, literally, is to develop a program designed to help students realize the resources and opportunities that are around them – the program makes sure that Paul sophomores know everything that I wish I knew as a sophomore! Sophomore Shadow participants take part in a variety of programming throughout the fall semester to help them explore academic interest areas and possible careers, and to expand their skill sets. Students who meet a minimum requirement during the fall semester earn a one-day shadow experience with a UNH alumni or local business during the spring semester in New York City, Boston, Portsmouth or Manchester.

Had a program like Sophomore Shadow existed during my sophomore year, maybe I would’ve bee
n able to see beyond one quiz grade. I would have been engaged in something beyond my self-doubt – engaged in programming in leadership, communication, wellness, and professional development. I would’ve had something to look forward to once I got through the tough first few weeks and a resource to get me through it. I could have had a realistic goal to aim for – participate in as much programming as possible so that I can have my pick of shadow experiences – and an academic community where I felt I belonged. A program like Sophomore Shadow would have been my slump buster.

And in the month and a half since the program kicked off, I’ve seen it ward off the Sophomore Slump in the class of 2019. Working closely with sophomores, I’ve seen very few signs and symptoms of slumping from those actively engaged in the programming. Those who are participating are taking ownership over their undergraduate courses by discovering their academic areas of interest. They are taking ownership of their professional development through networking opportunities, resume reviews, bootcamps and career exploration. They’ve taken ownership of their ability to be standout internship candidates by doing something, voluntarily, that expands their skill sets and proves their dedication to being excellent.

Sure, we all doubt our paths at one time or another. We all find ourselves a little off course. But, in just a few short months I’ve seen that by engaging students in a program like Sophomore Shadow and allowing them to dive head first into their own development professionally, academically, and personally, we can ward off the slump and encourage excellence.

Kim Moran is currently the Sophomore Shadow Program Assistant for Peter T. Paul College of Business & Economics. Kim is a 2015 graduate of UNH, with a degree in Communication: Business Applications. While a student, Kim was a member of the ‘Cat Crew Marketing & Promotions team and later the Student Marketing Assistant at UNH Athletics. She was also a June Orientation Leader and on staff for the PrOVES Program, after participating in PrOVES prior to her freshman year at UNH. Kim was on at least one broomball team every year, and even played on one ill-fated inner tube water polo team.

Outside of UNH, Kim is slightly obsessed with the Bruins, an avid coffee drinker, and a newly self-proclaimed crazy cat mom to her two one-eyed kittens.