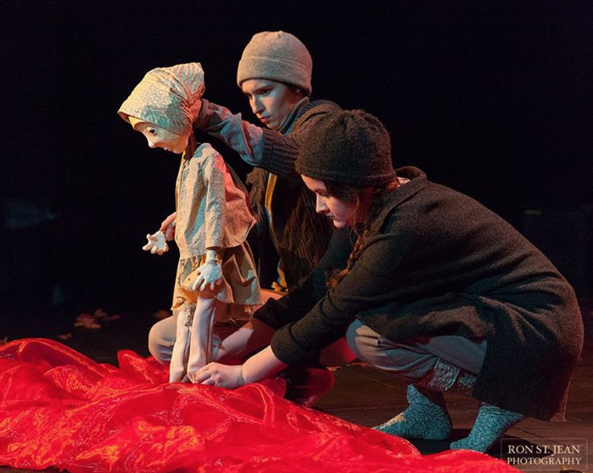 Last night, I had the pleasure and privilege of seeing the world premiere of SEMATAKAKI, presented by the UNH Theatre and Dance Department, and the Papermoon Puppet Theatre Company. I was genuinely blown away by the work of the cast and creative team. The piece was incredibly unique, thought-provoking, and moving. Not only does it give students with the chance to experience another culture from the audience, but also provided a group of Theater students with the opportunity to be an integral part of creating this original show.

Iwan Effendi and Maria (“Ria”) Tri Sulistyani of The Papermoon Puppet Theatre came to UNH all the way from Indonesia, as a part of Cultural Stages: The Woodward International Drama and Dance Initiative. The initiative is funded by Ellis Woodward, UNH Class of ’74, and is intended to connect the UNH to other cultures through theater.

Iwan and Maria brought with them puppets and a concept. They wanted to create a show to honor the victims of a genocide that occurred in Indonesia fifty years ago. They cast their student actors, and got to work devising a show with puppets, masks, no speaking, and a heavy meaning. If you’re wondering how this is possible, student stage manager Emma Perkins was, too, when they first embarked on this journey. Her reservations, though, were soon alleviated. She says, “Ria and Iwan were able to take a tragic event, and a group of people, and make it into a masterpiece.”

Ria and Iwan built this piece from the ground up; they were behind the direction, the costumes, the puppets, the set, as well as the inspiration for all of the “love and passion” that went into it, according to student actor Isabelle Beagen. The students involved, though, were also an integral part of the show’s development. One of the student performers, Sarah Hurley, shares: “The entire process was an exploration. We we’re given a framework and some history and from there we created a world built around a community being eaten away at by secrets and fear. This was contrasted by how close we grew to be as a cast – puppets and all.”

Presenting such a tragic story in a medium that was brand new to them, presented many challenges to this team of students. Rachel Noland, who appeared in the show both as a puppeteer and masked villager, says “Genocide is not easy to talk about, and not easy to feel. But it needs to be talked about and felt. I think our story, presented in this way, touches everyone.” The students also had to learn how to communicate through the puppets and through movement. Another student actor, Jake Compagna says he’s gained “an appreciation for the artistic value of silent theatre, and a better fundamental understanding of how the human form can convey messages without a single word”.

The team of students all have plenty to say about what they’re taking away from this process, and what they’ve loved about working on it. The common theme in all of their comments, though, is clear. “Working on Sematakaki was truly a one-of-a-kind experience that I will always remember. Ria and Iwan are amazing directors and fantastic people to work with,” says student actor Ina Nakuci. The couple from the Papermoon Puppet Theatre are at the soul of this production. The hard work and dedication of everyone involved is palpable from every seat in the audience. If you have the opportunity to experience it, I highly recommend it!

SEMATAKAKI has performances December 2nd through December 5th at 7pm, and on December 6th at 2pm. Get your tickets online, or from the PCAC Box Office.

Newer PostThe Basics of Not Being #Basic in the Kitchen #2: How to Scramble Eggs
Older PostAll About J-Term