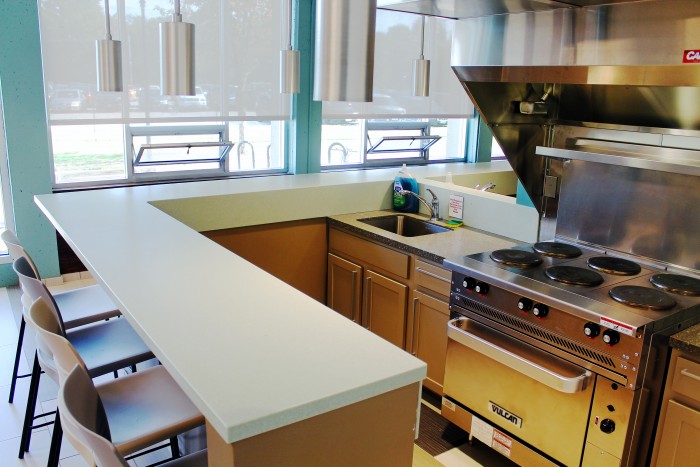 Of the many renovations that have been happening on campus, one that needs to be recognized is the kitchen remodel in Babcock, UNH’s graduate residential hall. The building hasn’t seen a renovation this big since it was erected in March of 1968. Prior to the remodel, each floor had a designated community kitchenette. With the new kitchen installation, the entire dorm can cook on the first floor. It allows a “central place to cook meals together” rather than having the kitchens divided, says Sean Winston, the project’s manager. The floor plan includes seating for up to 20 people, and the modern openness “gives more people more opportunity to socialize” while they cook. Preserving and encouraging community was identified as a central goal during the planning process.

One question raised during construction was how many people would be cooking at the same time. With that in mind, three ovens and one four-burner and two six-burner stoves were installed, as well as a large reach-in refrigerator and two-door freezer, all commercial-grade, stainless steel appliances.

The eight-week remodel, which started in May and ended in mid-August, ran into hardly any issues. The old incinerator had to be removed and ventilation improved.

What do residents think? They love it. The multiple stoves, ovens and vast counter space allows many residents to cook at the same time. While the updates are nice, graduate housing manager Holly Ange says the best part is “there’s now plenty of space for sharing meals, including multiple tables and chairs that can be moved around and even a booth toward the back of the room for a more relaxed seating option. Seeing people share meals together definitely makes Babcock feel more like home.”

“The response to the kitchen has been fantastic,” continues Holly. “I believe the best part of living on campus is the community you live in, and the renovation has certainly created new opportunities for our community to grow.”

From energy-saving features to potential opportunities for community growth, Babcock has it all. We only have one question: When’s the next potluck?