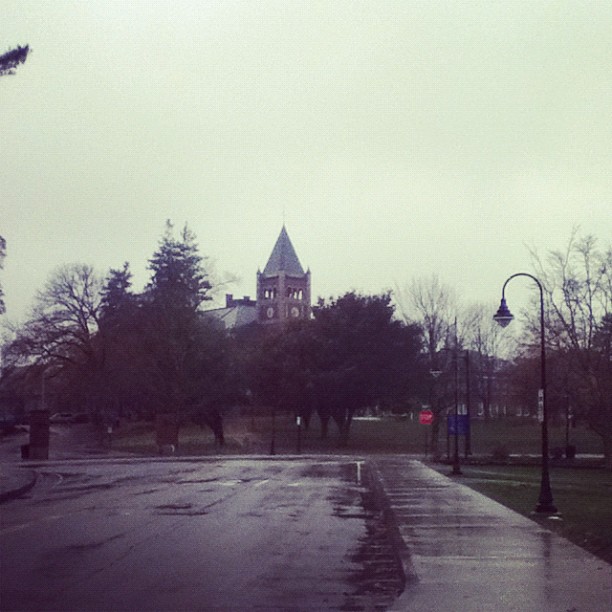 There was widespread panic. Seriously. Frantic phone calls and text messages were exchanged by the thousands. Emails from the Chief of Police instilled fear in some students… Chaos. The Mayans were right. For a brief instance, it seemed as though life on earth would cease to exist. That’s certainly what it felt like on campus, at least.

However, ask almost anyone not from the greater NYC area or New Jersey and they’ll probably tell you that Hurricane Sandy – i.e., the 900-mile wide, destruction-bringing storm – failed to meet expectations. The widespread chaos that had been promised, failed to affect most students at UNH – which is good news! Many dorms only lost power for an hour at the most, and there were only a few unfortunate incidents regarding off-campus residents where students were stranded without electricity for more than 12 hours. Even then, should we be complaining?

The Durham Public Works crew deserve a ton of credit. Along with the staff at Holloway Commons, who provided take-home meals in case students were stranded without food. The police and staff in charge of communicating with the students need our thanks, too. We may have not been hit very hard, and to most, it seemed like a Halloween Weekend reward, but without the intense preparations carried out by everyone involved, it certainly could have been worse.

We should also thank North America’s sporadic wind currents. At first, it seemed as though the storm was going to barrel right on top of us, but shifted north at the last second and we were only hit by the outer edge of rainfall.

If you want an idea of what COULD have happened, just browse through some pictures of the terrible damage and destruction that occurred in New Jersey and New York City.

In the end, we seemed to escape relatively unscathed. Condolences go out to any who suffered severe losses, and thanks go out to all those who volunteered and worked tirelessly throughout the night to provide our safety. Keep that in mind next time you complain online because a hurricane cut you off from Twitter for 30 minutes.