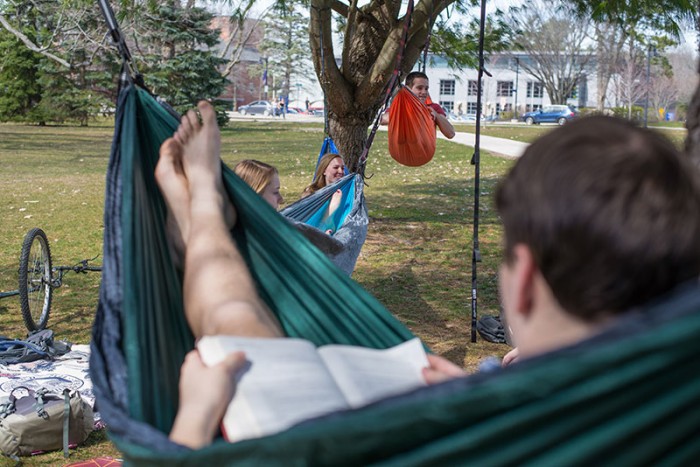 OK, there’s nothing wrong with rest and relaxation. But as you probably know, physical activity has also been linked to relaxation — or at least with feeling less stressed. And given that finals are rapidly approaching, it seems like a good idea to say it again.

During physical activity, your body releases endorphins, which are basically naturally-produced opiates, which is one reason you feel more relaxed after you work out. Equally importantly (according to me, anyway), exercising is a sort of “active meditation,” in which you concentrate on something other than what’s causing you stress. Physical activity has also been connected to improved self-confidence and mood, and better concentration and cognitive capacity. That’s right: It helps you think!

Unfortunately, according to a number of major studies, it’s when we’re stressed that we are least likely to make time for physical activity. There are a number of reasonable causes for this: We’re most stressed when our schedules are packed (like when we’re finishing final projects), when we are highly focused on important tasks (like studying for finals), and when we’re so focused on our problems that it doesn’t feel we have time for anything else (like school’s almost over and you still need a summer job). But this is exactly when we should make time for physical activity. It doesn’t have to be a huge affair; you can benefit from a 30-minute walk or living room yoga.

It’s worth saying that “physical activity” is a pretty customizable experience. Most obviously, you don’t need to train for a marathon. Set reasonable goals for yourself. But there are other important things to think about, too. For example, what type of activity is right for you? Does running on a treadmill makes you feel like a hamster? Maybe try something that involves problem solving, like rock climbing. Don’t like team sports because other people are the main source of your stress and you work out to take a break from them? Try swimming. You only want to play quidditch, but that’s a fantasy game from the Harry Potter series? Well, check out this video I found on the internet.

Now, I said at the beginning of this piece that endorphins are a natural opiate, so it might not be a surprise that for some, the challenge is not convincing yourself to move your body but knowing when not to. It’s unclear how many people in the U.S. are addicted to exercise — and that might be because it’s hard to spot. Unlike other forms of addiction (drugs, video games, alcohol), exercise seems like a relatively benign habit; if anything, it seems like a healthy addiction. However, like all addictions, it can be a disruptive, harmful force in your life.

One way to recognize if you’re addicted to working out is to ask yourself honestly if you value it more than your friends, family, work and other obligations. Furthermore, unhealthy associations with exercise, such as equating your level of happiness or self-worth with your level of fitness, are telling signs. Not surprisingly, then, exercise addiction also sometimes occurs in conjunction with eating concerns. One way to check in on yourself is to ask what your level of commitment is. Are you training like a professional athlete but in reality you are not a professional athlete? Might be time for some self-reflection — and to make an appointment with the UNH Counseling Center.

If you’re wanting to include more physical activity in your life, you might start by meeting with one of the wellness coaches at the UNH Office of Health Education and Promotion. They’ll help you figure out how to create lifestyle changes that are right for you. Additionally, the Hamel Recreation Center offers a number of classes, including yoga, spin and cardio kickboxing. And, of course, since we live in New Hampshire, if you have access to a car (or a friend with a car), you could plan a day hike.