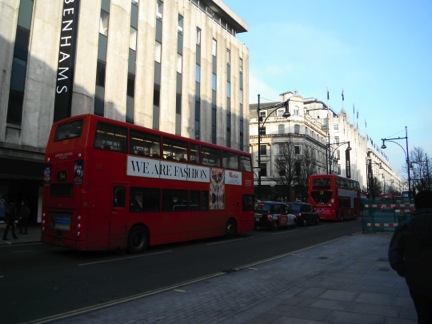 It’s hard to stop myself from thinking of this trip as a vacation…  Since I’ve never experienced anything similar to a semester abroad, I keep forcing myself to remember that I’ll be here for three and a half months rather than merely a vacation.  I have plenty of time to see the sights – it’s unnecessary to see every tourist attraction, try every restaurant, go to every pub, and meet the entire Regent’s student population in the course of two days.  Now that I’ve been able to take a deep breath and collect myself, I can see what a wonderful time I’m going to have this semester.

After a 7- hour flight (8.5 hours on the plane if you count the delay at the airport gate) I took a train, taxi, and a great deal of time walking with my fellow UNH students to find our hostel.  We arrived around 10 am England time (so 5 a.m. U.S.) time exhausted and dirty. However, our London advisor at UNH had told us not to sleep under any circumstances – in order to reduce the effects of jet lag.   Therefore, we wandered around the city for several hours, getting lost multiple times but eventually finding our school and a cute garden café in which to eat lunch.  After lunch we found some clothing stores and tried to figure out the tube (London’s subway system) but gave up and walked back to our hostel.  We found a Pizza Express for dinner and experienced London’s reputation for “doing other countries’ food well” in the words of our hall director with some amazing Italian-style pizza.  At night, feeling extremely jet-lagged and cranky, we spent some time at the hostel before retiring to bed around 9 pm London time.

The next day, we took another taxi to Regent’s College and arrived around 8 am.  Since then, the past two days have been a relative blur of meetings and orientations.  Hopefully these are reaching their end, but the amount of information with which I have been introduced is overwhelming.  Many of my classes will be field-trip based in London (including a trip to see the Tempest at the Globe theater on Shakespeare’s birthday!) My roommate is from New Jersey and is really nice so far, eliminating one of my biggest fears for the semester – an unfriendly roommate.

The UNH students and students from other schools have been extraordinarily amiable, and during my time here I’ve already met students from New Jersey, Tennessee, Colorado, and Minnesota.  Regent’s College is beautiful, and the fact that it is located within a park is a huge benefit of living here.  I was worried before departing about how well I would be able to become accustomed to city life, but Regent’s park is more of an escape from the city than a part of it.  Today, London experienced several inches of snow- unheard of, apparently, during this time of year.  London typically has two snowy days per year, so the storm resulted in school and store closings throughout the city.  Obviously, my fellow UNH students and I are used the snow and did not see much of an issue, but it was interesting to see their reactions!

Tomorrow I’m excited to be taking part in a bus tour of London, during which I’ll be able to see all the typical tourist attractions and famous London sights.  I’ll then be going on a boat tour of the Thames at night, so I’ll have a lot of great pictures to post next time!

Newer PostReady To Be Back!
Older PostWinter Break in New Hampshire