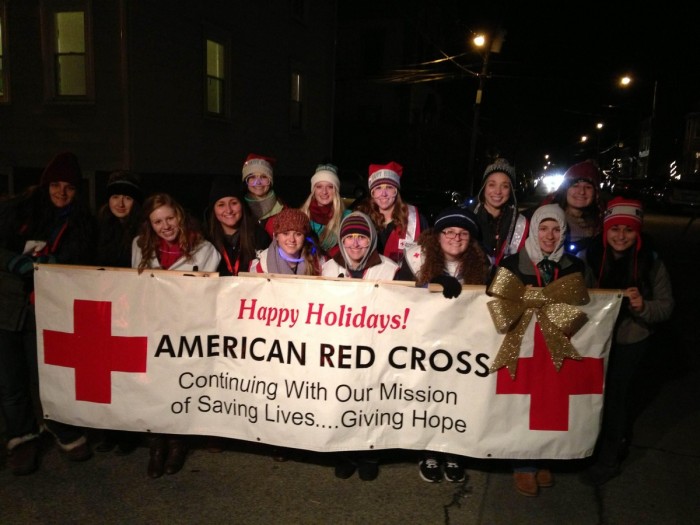 When I think of the color red, I am not solely reminded of the one day of the year in which the color is nationally celebrated (Valentine’s Day). I also think of how the color reflects another important aspect of my life.

As as senior at UNH, I have been a member and volunteer of the American Red Cross for three years. The colors of red and white have started to remind me less of Valentine’s Day and more about my pursuit to help others through an organization that found its way into my heart at the age of 13.

At 13, I was a 7th grader in junior high school and as a part of project I decided to try and ask my local community to donate blood. I spent several days each week at a foldout table near my local community center trying to sign up donors for a mobile blood drive that I had scheduled. With the help of my dad, we managed to get about 25 people to take time out of their Sundays to give blood. As a 13-year-old I was too young to donate, but the experience and the work I accomplished was not forgotten.

At the end of my freshman year at UNH, I learned about a club that had just started on campus that was associated with the American Red Cross. It was too late in the semester to join, so I waited until the fall of my sophomore year to sign-up and become a member of the American Red Cross Club at UNH.

As a member and volunteer of the club and the American Red Cross, I have had the chance to volunteer at blood drives on-campus and at the Portsmouth Parade in December, to receive training in disaster services, to spread inspiration and cheer with  letters to soldiers, and much more.

In my senior year as disaster services chair I have been even more active within the club, which has enabled me to make even stronger and longer-lasting connections with fellow officers and members. As a disaster services chair, I try to bring training courses in feeding, sheltering, client casework, disaster assessment, etc. to our club. As a volunteer I have been able to increase my background in first aid, CPR, and disaster response. Recently, 13 club members and I attended a psychological first aid training, which provided us with valuable information and skills in case we were ever called upon by the local chapter during a disaster. What some students at UNH may not know is that Oyster River is a designated shelter in times of emergency for the Durham area. If there was ever a disaster, club members would have the necessary skills to help at Oyster River.

In 1943, President Franklin D. Roosevelt, stated “I request that during that month (March) our people rededicate themselves to the splendid aims and activities of the Red Cross.”

Each year the president of the United States proclaims March “Red Cross Month.” The American Red Cross uses this opportunity to thank supporters, increase public awareness and consideration of Red Cross’ mission and drive contributions. This year the American Red Cross is utilizing the theme “Everyday Heroes” to recognize the nation’s everyday heroes who in some way help their community by giving of themselves. Anyone can be hero by making a financial or blood donation, taking a Red Cross class in first aid and CPR or volunteering.

As March is Red Cross Month, I’d like to do my part by sharing some things the American Red Cross has done or is doing at UNH through the club, locally, and nationally.

1.Last semester the club received recognition from New Hampshire as recipients of the Spirit of New Hampshire Volunteerism Award. We were recognized for our hard work and dedication within the seacoast area as well as for being the first college club in New Hampshire.

2. Fire safety and home fire campaign: Some common disasters the Red Cross responds to are home fires. As a result the Red Cross has launched the Home Fire Campaign through the act of bringing volunteers to communities with a risk for home fires, by installing smoke alarms, and by providing fire safety information. During one weekend, the American Red Cross reached more than 7,000 people and installed nearly 4,500 smoke alarms from coast to coast as well as in Alaska and Hawaii. If you have outdated fire detectors please replace them or contact your local Red Cross for information on fire safety. Evacuation routes and emergency supplies are good to have on hand. If you are able to donate to supplies such as blankets or monetary contributions, please contact your local American Red Cross.

As March quickly approaches, it is good to recognize people within your community who are making a difference. Whether it be an American Red Cross volunteer or your grandmother who knits for charity please thank them for all that they do. Heroes are made every day in different shapes and forms.

Even the best of us sometimes need a helping hand.

These apps could be invaluable in a disaster. One user of the first aid app said that they were in their “friend’s car when suddenly a friend of mine start[ed] having a seizure. I immediately looked at this app for help while calling 9-1-1 on another phone. I told the police about it and they said that there’s a good chance the information in this app saved my friend’s life.”

With the growing use of technology it is good to be aware of the resources available at your fingertips.