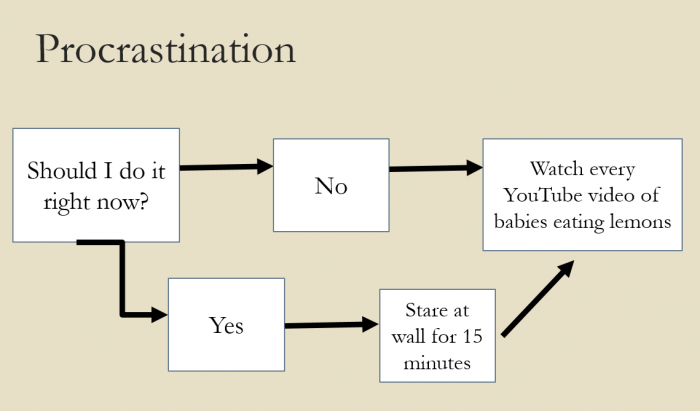 So, College Student Nearing Finals. How’d studying go today? What’s that? You barely studied at all? You fell down a YouTube rabbit hole, and then you spent a while looking at this list of dog facial expressions that you can totally relate to? And then you cleaned your mini-fridge? And that was all pretty exhausting, so you took a nap, and that’s why you’re maybe not 100% prepared to take the exam tomorrow?

When you have no idea what you’re doing but you decide to stay positive until you figure it out. Source: Buzzfeed

Well, as you probably know, you're not the only one. According to one study, somewhere between 80 to 95% of college students procrastinate. Some might say that's because you're a millennial, but millennials aren't particularly special in this respect. Roughly 2000 years before you were born, the famous Roman lawyer and orator Cicero was ranting that “in the conduct of almost every affair slowness and procrastination are hateful.” People have  always procrastinated, and probably always will as long being alive requires us to sometimes do challenging things.

Just because it's natural doesn't mean it's good, of course. It can prevent you from making progress toward your long term goals, or it stops you from doing the things that people you care about depend on you to do. But, as psychologist Joseph Ferrari says, overcoming procrastination is not as simple as just telling yourself to try harder. “As I tell people,” he says, “to tell the chronic procrastinator to just do it would be like saying to a clinically depressed person, cheer up.”

To figure out what you can do, it helps to think a little about your particular experience of procrastination. Not all procrastinators, it turns out, are created equal. For example, are you procrastinating because what you have to do makes you actively unhappy? There’s a difference between thinking your economics homework is difficult and finding that it doesn’t interest you. If it’s the latter, your procrastination might actually be a sign that you need to make a change. This isn’t an easy determination to make; after all, admitting that you don’t like an important aspect in your life—like a choice of major—can itself be challenging, and therefore yet another source of procrastination. Procrastinating by procrastinating, if you will.

Of course, maybe you do like what you're studying, but you still wait until the last second to write a paper. This is what Tim Urban in this TED Talk (which is hilarious, and which you should most def check out) calls “long term procrastination.” Long term procrastination is particularly hard to deal with because it’s the sort that comes without deadlines. Deadlines--which eventually causes you to panic enough to write the paper, file your taxes, or write your older sister’s wedding toast--are the cure-all for procrastination: it turns out that the fear of failure of social embarrassment tends to be stronger than resistance to difficult tasks. But not everything comes with deadlines. If you’re a serious procrastinator, going to the gym, or writing a thank you to your grandmother, or getting that weird noise your car is making checked out might seem like Herculean tasks--even if you know they're worth doing.

There’s even a sort of bizarr0-procrastination, where you feel so anxious about completing work that you do it before you’re really ready to. Artists and innovators have long noticed that good ideas need time to percolate. The name for this anxiety is precrastination. Writer Adam Grant suggests that those who suffer from precrastination can usefully redirect their energy by starting work long before it’s due, and then putting it aside for a while. This provides the time that’s sometimes needed for complex ideas to really develop. Of course, that doesn’t give you license to play Angry Birds all day--but it does mean that forcing a complicated task can be counterproductive.

Sometimes a task seems hard because we see it as a whole, and not as its component parts. For example, maybe the 100 pages of reading you have to do by Friday seems like far more than you can do—but what if you do just 20 of those pages today? Maybe you're thinking of starting a novel. The prospect of writing 250 pages sounds like a lot, but if you write just one page a day AND take every Saturday off, you could finish a draft in a year. Sometimes, by giving yourself a smaller, more accomplishable task, you can reduce your own resistance.

Look at the Task with a “Long Head”

Sometimes we get so stuck in the unpleasantness of what we have to do that we lose sight of the way it adds value to our lives in the long run. When you notice yourself procrastinating, focus on what the work will bring you in the long run. How will doing this add value to your life?

For most of us, other people’s opinions matter a lot—and you can use this to your advantage. Tell people what you’re working on and why. Even better if you can enlist them to collaborate with you: if you agree to exchange essays with a friend a couple days before the assignment is due, you might feel like you have to get started earlier than you would otherwise so  that you can produce something you won't be embarrassed to have a friend read.