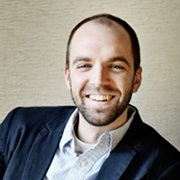 Seems like a pretty fulfilling set-up, no? Wake up, work creatively for several hours, eat a hoagie, answer emails, call it a day. It wasn’t easy to get there, and it’s not quite as simple as it looks from the outside, but this is the schedule of Chris Outcalt, current editor of 5280 Magazine and 2006 graduate from the University of New Hampshire.

Chris is a writer, a journalist, a storyteller. He finds an interesting story – something that he enjoys, or something that he’s never tried before – and pursues it. “Great stories have a soul,” he said during his visit to UNH. As the “Donald Murray 2013 Guest Journalist,” Chris gave us students a glimmer of insight regarding his creative process, and how he got where he is today. It takes patience, it takes practice, and you’ve got to have fun with it.

Most of his advice possesses greater value for struggling writers and prospective journalists, and when asked for his #1 tip, Chris scratched his beard for a second before confidently replying, “The most important thing is getting it right. Do that first, then fill in the storytelling.” — Writers, take note. Lay the groundwork down before moving on to the heavily-creative stuff.

His advice (and “rags to riches” story of success) should be absorbed by more than just liberal arts students, however. It’s more than just writing well and publishing it. It’s about marketing yourself. It’s about playing to your strengths. If you’re  a Business Major with a specialty in Foreign Economics, then play that card! Political Science student, but you absolutely excel in regards to diplomatic relations? Pursue it. If you consistently work hard in a particular area, you’ll not only hone your skills at something you LOVE, but career windows will open.

When asked how to best market yourself (in any field), Chris – this time – avoided the beard-scratch and changed positions in his chair, allowing him time to think, “Publications [and companies] are going to hire a person, not the institution that you came from.” He paused, gazing out over the crowd of students and faculty members, then continued, “Let your experiences, passions, and knowledge do the talking. It’s not as daunting as you think. Answer ads, work hard, convey who you are as a person and you make your own luck  that way.”

For a man who started off as a typical staff writer for a newspaper like the Concord Monitor, Foster’s Daily Democrat, or Seacoast Online, Chris certainly put his own advice to the test. And you’d be hard-pressed to find anyone who thinks he hasn’t “made it.” He writes about interesting people for a living, and reviews the best and boldest craft beer in Colorado. Seems like a dream come true for just about anyone.

“Don’t be afraid to fail. If you’re not failing, you’re probably not learning. Be quick to admit what you don’t know. Find ways to take on [things] that excite you, maybe even scare you a bit. Work your ass off, but do it strategically…And this is a bit cliche, but probably worth mentioning: Don’t forget to have fun. If you don’t get excited about [what you’re doing], you’re probably in the wrong profession.”