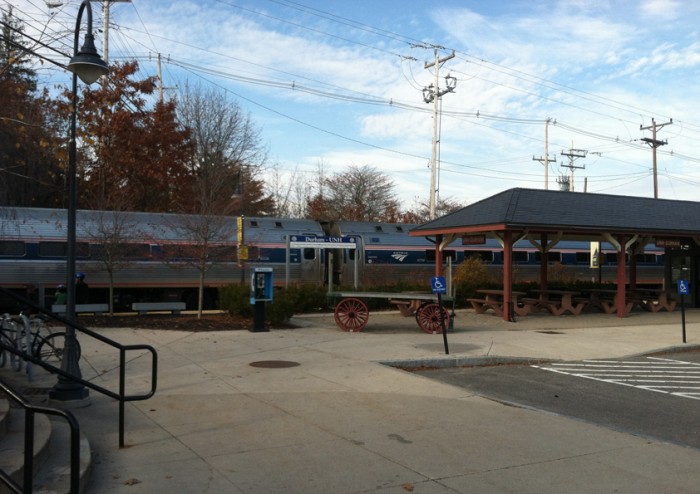 This story is going to span two weekends, but I’ll make it quick, RAW, AND EXCITING, I swear.

Last weekend, I traveled home to Vermont, stayed for a few blissful days and nights, then began my trek back to Durham on Sunday morning. I saw some exploding car chases, I learned about a strange species of carnivorous slug, and our car broke down (the radiator blew up). See? VERMONT IS ACTION PACKED. Keep holding onto your hats, folks.

We were stranded. White River Junction, Vermont. A proverbial wasteland, filled to the brim with slush, muck, and misery. I had no way of getting back to school, and couldn’t possibly fathom asking my already-generous drivers to spend several more hours waiting for the tow truck, fixing the car, then driving me again. I felt like a lost, powerless herd of livestock being swarmed by thousands of meat bats. It was visceral. Unnerving. A true test of my warrior-like fortitude, but alas, the pressure seemed too daunting.

Just as I thought my luck had run out, my savior swooped down and brought me the delicious, long-sought-after victory. It was clad in steel armor. A silver 300,000 pound behemoth, streaked by red and blue decals. AMTRAK! For just nineteen bucks, I could hire it’s services. From White River Junction to Springfield, Mass. Then from Springfield to Boston, and from Boston to Durham!

Granted, the routes and organization were pretty miserable. That’s not the companies fault. That’s just a reflection on the shoddy New England transportation system. But Amtrak is reliable. They saved me. I made it back to Durham, and all incidents with meat bats and flesh eating slugs were avoided!

My second weekend started (and ended) on a brighter note. I made a trip to Portland, Maine to do some eating and drinking with my mother and brother. How did I get there? Amtrak. How did I get back? Amtrak. First of all, Portland is a beautiful city. Imagine Portsmouth, but much larger, yet still maintaining the thriving culture that we love oh so dearly. A beautiful harbor, wonderful stone-architecture, giant mill shops that would make any grandfather sob with nostalgia.

I’ll refrain from overwhelming your eyes with nonstop drivel, but I will say that  Silly’s Restaurant and Po’ Boys and Pickles played host to some of the best tasting food and beverages I’ve ever had. All I’m trying to say is this: Portland is amazing, so is Boston, and Amtrak offers a daily service (The Downeaster) for only 35 dollars round trip. Take some friends and see a show at the State Theater (it IS one of the best venues in the Northeast, after all). Catch a Celtics game, wander around Boston for a day, or, dare I say, visit your family for a weekend, too! There may not be a direct transit from Durham to wherever home is, but with a little bit of patience and extra navigating, you can find your way, much like I did.