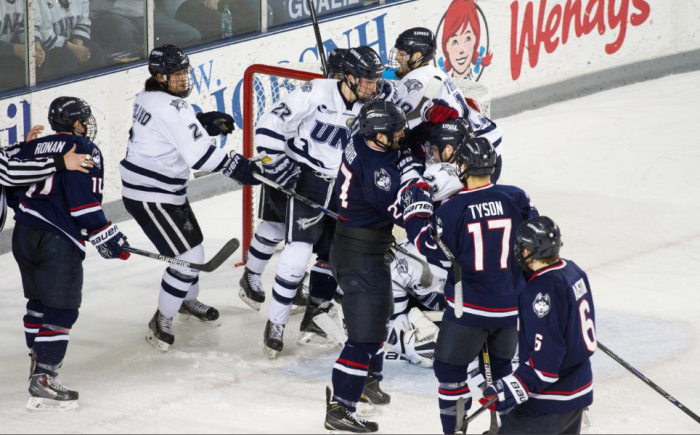 The Wildcats celebrate their victory over the UConn Huskies on Saturday.

There are only two words to describe this past weekend: playoffs and championships. The Men’s Basketball team headed off to Albany for the America East semi-finals (60-58 Albany final). Women’s Track and Field competed at the ECAC Championships. The Men’s Track and Field team competed at the IC4A Championships. And the Men’s Hockey team swept UConn in the opening round of the Hockey East playoffs (5-2 Friday night; 2-0 Saturday night). Having only attended the hockey playoffs games this weekend, I can only speak to those. But those games were truly incredible.

The Whitt had a kind of energy to it that can only be brought about by playoffs. Friday and Saturday nights, while not sold-out games, were two of the best games I’ve been to in a while due to both the crowd and team. UNH continued to rake in the wins with a now seven game winning streak which, according to UNHWildcats.com, hasn’t happened since the 2006 season.  Being in the crowd for these electric games versus the UConn Huskies was something that every Wildcat should have experienced.

Friday night started the series and gave the Wildcats a chance to show that the “Whitt is Our House” to the Huskies.

UNH came in with a five-game winning streak, with two of those games being a weekend sweep against UConn on the road and at home. As usual with seven o’clock and the puck drop growing near, the lights dimmed and the student section got warmed up to cheer on the ‘Cats. The team came onto the ice and there was a prideful roar coming from the Cat Pack section of the Whitt. It was time to show UConn that this is Wildcat Country. The puck dropped minutes later and the stands were jumping up and down with the “I BELIEVE IN UNH” chant. Getting to be a part of this once again struck me in a way it never has after attending an away game (read about the UNH vs. UConn in Hartford game here). UNH has some of the most united and dedicated fans in the conference. No wonder UConn might struggle when their student section is lacking in the cheers department.

The student section erupted as Tyler Kelleher scored the first goal of the weekend during the first five minutes of the game. This is how the Wildcats were going to play for the rest of the night! The fish was out on the ice and first point was on the board.  Seventy seconds later, Grayson Downing added another point during one of three power plays that UNH would score on. The crowd was in a frenzy as the Wildcats rounded out the first period with a 2-0 lead over the Huskies.

The hockey craze continued as the Oyster River Youth Hockey team took the ice during the first intermission to show us how future Wildcats play hockey. And it was adorable to say the least.

The second period started and UNH was on the prowl. Shot after shot was fired at UConn goalie Rob Nichols with nothing getting in. The long distance hex was sent across the ice from the student section and eight minutes into the second period, our captain, Matt Willows scored the third goal of the night bringing UNH into a 3-0 lead. The crowd all through the Whitt was abuzz with excitement. How could the Huskies stand a chance? “1-2-3 We Want More!” called the student section as the game continued. And the students got what they asked for, plus frosties from Wendy’s!

Not even a minute later, the frosty fourth goal of the night was scored on a power play by Kelleher and the crowd when crazy again. “U-N-H, U-N-H” could be heard throughout the Whitt and it was obvious who would be taking home the win. Near the end of the second, UConn finally got on the board bringing the game to 4-1. This goal shook neither the team nor the student section with students saying, “yeah, right – like UConn could even score one more time, let alone three.”

The third period began and the energy in the Whitt seemed to intensify as it became even clearer that the Wildcats had the game in the bag. At almost 10 minutes left, UConn finally seemed to surge a bit by putting up a second point and cutting UNH’s lead in half. With 45 seconds left of gameplay, UNH scored again thanks to Downing and an empty net. The Wildcats finished the first game of the opening round 5-2.

The second night was one that both the Huskies and Wildcats were going to have to fight for. UConn was out

for blood and proved it in early game play as they battled Umile’s squad all over the ice. The Wildcats were definitely not willing to break their end of season and playoffs winning streak. The ferocity of play by both teams lead a game two that can only be described as both the most exciting and boring game of hockey. Ever. The first two periods went scoreless with multiple shots on goal by both teams. By the time the third period rolled in, the 0-0 game had the Wildcats outshooting the Huskies 30-9. With so many “should have been a goal” moments, the entirety of the Whitt was on edge. This meant that when UNH finally put up the first goal of the night, the crowd exploded. The cheering was incredible and chants usually reserved for just the Cat Pack Section rang through the arena as everyone yelled “sieve, sieve, sieve!” It looks like UConn goalie Nichols finally answered the UNH students question, “will you be our sieve?”

The two goals that secured UNH’s spot in the quarterfinals were scored at 11:02 of the third by Kyle Smith and 19:13 (47 seconds left of gameplay!) by Downing. The team and student section got the win they deserved after an intense game two.

The Wildcats move on to the Hockey East quarterfinals to take on the No. 4 seed, Providence College at Schneider Arena, March 13-15.

Newer PostHow Does Snow Signal Climate Change?
Older PostLet’s Not Kid Ourselves, Guys: Body Image Matters to Us, Too