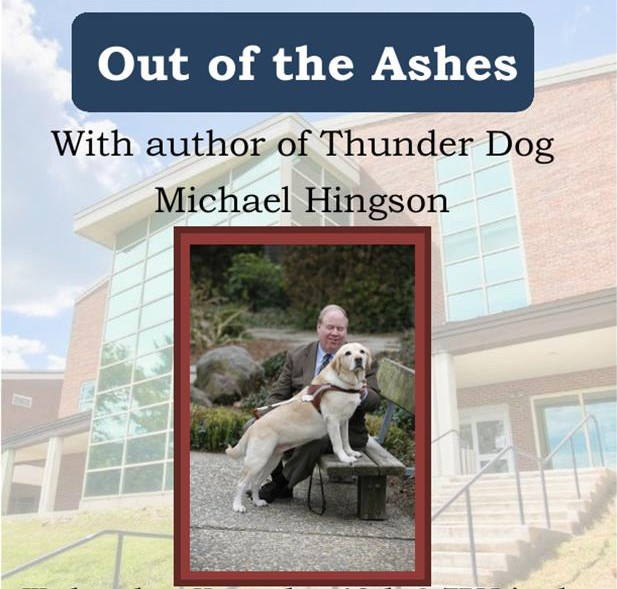 Being from New York, the events of 9/11/01 have always held a special place in my heart. At the beginning of the year when I was looking at the events calendar for the semester, I was excited to see that Michael Hingson, a 9/11 survivor, was coming to UNH to speak. Michael Hingson, blind since birth, survived the attacks of 9/11 with the help of his guide dog Roselle. The speech, given on November 13th in the Strafford room, I live-tweeted during as @UNHStudents.

As soon as Michael Hingson took the stage, his presence was felt by the whole room. He started off by joking about how blind people don’t understand where “over there” is (in reference to Dave Zamansky’s previous explanation of where the emergency exits were located). He then asked the room a few questions that everyone had to verbalize their answers to because, as Hingson joked, he couldn’t see a show of hands. From this point on, I was extremely intrigued to learn more about Hingson, his life, and how he survived 9/11.

Hingson gave us a brief history of his life, from how the doctors told his parents to put him in a home because he was born blind, to how he graduated college with a very impressive GPA. He told stories about how insurance companies wouldn’t sell him insurance because he was blind and how he ended up opening a company called Quantum in 1999 on the 78th floor of Tower One of the World Trade Center. Because he was born blind, Hingson made sure he learned every inch of the World Trade Center “just in case.” He obviously had no idea how important of a choice that was on the morning of September 11th, 2001.

On the morning of the 9/11 terrorist attacks, Hingson and his friend David were preparing for a presentation. When the plane hit, they heard a muffled noise and felt the building sway 20 feet or so. Hingson recalls that he felt like the building was going to fall over. Not even knowing what happened, they decided to evacuate the building via the stairs.

When Hingson, David, and Roselle reached the stairwell, Hingson remembers smelling a familiar odor. A frequent flier of American Airlines, Hingson recognized this odor as being jet fuel burning and suddenly realized the magnitude of the situation. So began the journey down 78 flights of stairs with David shouting updates from the floor below, and Hingson commanding Roselle to go “down, left, down, left, good girl!”

Upon reaching the lobby, the group found themselves ankle deep in water. Still confused as to what was going on, they were told to leave immediately. After leaving the building and walking a short distance away, they heard a terrible noise. That noise of course, was the tower collapsing. Hingson ran, with Roselle guiding him. The smoke and debris made it hard to breathe. Hingson and Roselle reunited with David and found their way to safety.

I’ve read many 9/11 survivor stories and watched a fair share of documentaries about the attacks that occurred on that sunny September morning but getting to hear a survivor story firsthand, especially one as amazing as Hingson’s was so inspiring. Both Hingson and Roselle’s calmness and focus that day allowed them to beat the odds and come out as survivors. Hingson has written a book about his experience called Thunderdog which I haven’t read but definitely plan on doing so. He made me realize how much I take my vision for granted and what would happen if I suddenly lost ability and how I would survive.