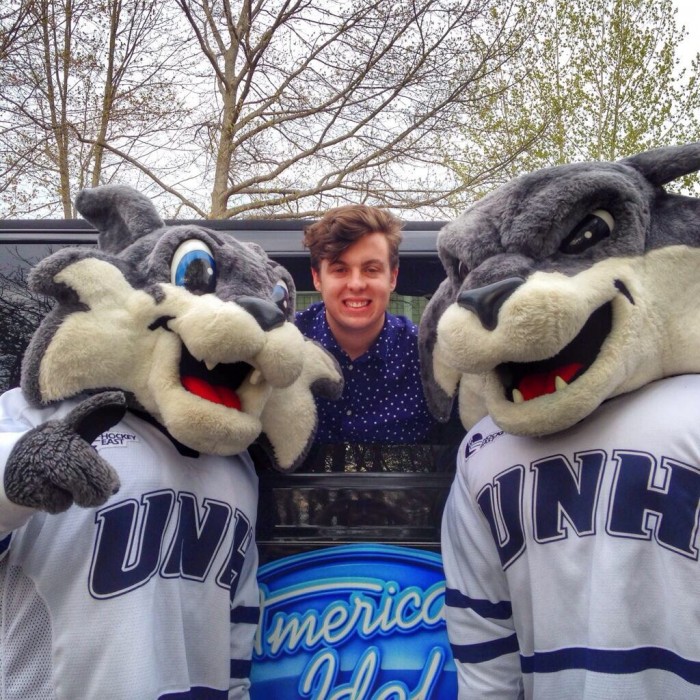 It was a star studded weekend last week at UNH! Thousands of people gathered at the Durham campus to welcome Alex Preston, American Idol contestant back to his native state of New Hampshire. Preston, who recently turned 21, has taken time off from his academic career here at the University of New Hampshire but hey, when you’re in the running to become the next American Idol, who can blame him?

I was aware from the beginning that a UNH student had gotten a golden ticket (as it’s referred to on American Idol) to go to Hollywood. I knew enough about American Idol to understand that making the top 13 after that is no easy feat. But weeks later, I saw online that Alex Preston had made the top 12 and I remember thinking to myself, “Wow, this kid must be really talented!” After seeing his concert at the Whittemore Center Saturday night, to say Preston is talented is an understatement. But I digress.

Preston’s homecoming was set for Saturday the 10th. His visit to UNH was to start with a parade down Garrison Avenue and Main Street. I made sure I got to the school early to make sure I got a parking spot. After successfully acquiring a parking spot in front of the Paul Creative Arts Center (how fitting!) I made my way towards Main Street to stake out a spot for the parade. I found a perfect spot on a bench near the T-Hall bus stops. I then proceeded to monitor Twitter and Instagram (love my job!) until the parade began.

The parade itself was slightly delayed and by the time Alex Preston and company rounded the corner, Main Street was packed with families, students, children, and fans. There were colorful signs made in the hopes of catching a certain singer’s eye and matching t-shirts advertising the wearer’s support for the star. The star himself looked star struck as well as he drove past seated in between his parents. He smiled and waved at everyone, looking both ecstatic and overwhelmed at the same time.

As soon as the parade car containing Alex Preston drove past where I was standing, I immediately power-walked to the Whitt. While monitoring Twitter before the parade, I saw photos of people who had been waiting at the Whitt since noon and read tweets stating how there were more people in line than for Nelly! Needless to say, I was worried that I wouldn’t have a seat for the highlight of the night – Alex Preston: live in concert.

Luckily, I found a spot in the Whitt as did thousands of others. It was incredible to see so much support for Alex Preston. The anticipation could be felt throughout the arena and by the time Preston emerged from stage left, the crowd exploded! I was expecting that Preston would be a good singer (I mean, he’s in the top 3 for a reason) but I was blown away by just how great of a singer he actually was. Prior to the concert, I had watched most of his American Idol performances on YouTube (#nocable) so I was well aware of his talent but nothing beats hearing the music live.

Alex Preston’s set perfectly showcased his talent. He opened with a song he wrote called ‘Fairytales’ and sang popular hits that included ‘Animals’ by Neon Trees, ‘Story of My Life’ by One Direction, and ‘I’m Yours’ by Jason Mraz. However, his cover of ‘The A Team’ by Ed Sheeran blew me away. I’ll be the first to tell you how much I love Ed Sheeran (redheads unite!) but I thought Preston’s cover was better than Ed Sheeran’s.

Halfway through Alex Preston’s set, President Mark Huddleston joined him onstage. He handed Preston a UNH hockey jersey and told him to “never forget where you came from.” That remark was followed by a round of applause and a brief “U-N-H” chant from the crowd because they know the obvious – Alex Preston is going places and they were lucky enough to have seen the star’s talent firsthand before his singing career takes off.

Make sure to vote for Alex Preston on American Idol on Wednesday. You can vote by texting, calling on the phone, on AmericanIdol.com, and even Google!